I NEVER KNEW him in life.

The man with calloused hands and almond eyes that would turn into half-moons when he laughed. His pictures and his stories were already taken and told decades before I was born. As a child, I watched him age backward and forward in black and white, sepia, and color wishing the vice of drinking hadn’t taken him so soon. I would gaze at the playfulness in his smile and the copper in his skin, so identical to my mother’s. He was a constant-struggle-man with incessant drumbeats of war in his mind. He thought he kept them hushed, but his children noticed as he soaked his charred memory in bottle after bottle. As I got older, more of his stories were revealed in randomized hues like the stripes of my grandmother’s blanket.

“He never recovered from his mother’s death caused by his birth.”

“He never recovered from slitting men’s throats in Pacific foxholes.”

“He never recovered from watching his wife take his children from him.”

Like the serape, his life was a vibrant rainbow interrupted with blackened bar after blackened bar. But examining the torn-edged photographs, there still remained resilience in those calloused hands and laughter in those dark eyes.

In his final years, he watched six children achieve the dreams he hadn’t dared to pursue himself—faraway dreams that were considered folly while there were eager mouths to feed. Every road he paved, every trench he dug, and every concrete block he made laid the foundation for a bookish nieta he’d never dance with on her graduation day.

Manuel died sitting at his kitchen table on an overheated June 1981 night in Phoenix.

Sometimes, I look in the mirror and smile hard to see the familiar and unfamiliar of his face in my own reflection. 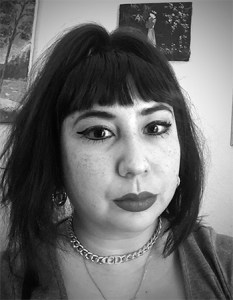 Sarah Chavera Edwards is a Chicana writer based in Phoenix, Arizona. A majority of her writing is based on her Mexican American heritage, mental health, and her own life experiences. She is currently working on a memoir.