WHEN YOU ARE A CHILD, you don’t understand anything. Relationships, feelings, even perfectly clear events leave you mystified. Luckily for me, I’ve grown enormously over the years. At 82, I understand the world and how it works, what makes other people tick, how their threatening behavior comes out of their own fears. I understand me. I may not be able to change how I react and behave but, after the fact, I do understand what I did and why. I know how to create my own safety, and this knowledge is power. I am no longer afraid. My life is reasonable, manageable, calm and satisfying.

What I’ve lost is the deep connection to my unconscious that haunted me as a young writer. To understand it, to control it, to communicate it, to myself as well as others, was the reason I wrote. I didn’t know it at the time, but I was writing to release the demons of my memory, to recreate the terrors of childhood and put them out there for me to see and deal with – to explore them and dramatize them and play with them in the hopes that they would lose their power.

Every good thing I’ve ever written comes from those early perceptions and memories. Villains, my parents, school bullies, powerful teachers seemed like giants, physically and certainly emotionally. When I read my early novel (“$250,000”) now, it’s obvious it was written from the vantage point of a twelve-year-old.

“His face was lined and lumpy. Bloated bags of skin ballooned under his eyes and heavy jowls dragged on his mouth. Most of the blond curls had vanished from his scalp and those that remained were withered and dry. He was still as slender as the groom in the photo; his legs were hairless and white and his arms were thin and young, but his face had been replaced by a caricature, a misshapen puppet head formed out of a sock, planted on his adolescent body as a joke.”

But as my life has become more reasonable and manageable, I am no longer at the mercy of real or imagined events, I have lost the need to stay in touch with my unconscious, which fueled my need and ability to be an artist.

I’m not saying I regret this. I understand it, and I want to put it down in words so I don’t forget it. So many writers lose their inspiration as they age. What they have lost is their connection to and their dependence on the unconscious once it’s been overcome by reason and adult ability. That is natural and normal and good. When that transition doesn’t happen, it may be good for the art, but not for the life.

I’m thinking of Diane Arbus because I’ve been reading her biography by Arthur Lubow. She never conquered her childhood obsessions. Neither did Tennessee Williams. Truman Capote tried to drown his in drugs and booze. Like Arbus, David Foster Wallace died, battling.

I am none of the above. I am a husband, a father, a grandfather, a teacher, an artist. I have a solid marriage, good relationships with my kids, a grandson who is an artist and has taken the most valued beliefs of my life as his own. Can there be any greater joy?

I have an apartment in the city, a little cabin in the woods where I can often be alone, a condo in Florida when I need to get away from the cold for my arthritis. I have written some good stuff that I’m proud of, though it never got the acclaim and attention it deserved. I have been an artist all my life, as a writer, a teacher, and mentor. Since my thirties, I have lived my professional life according to what was important to me and been involved in what I loved. For the last year or so, since the failure of my last effort (a memoir), I have not written anything new. The longest period like this in my life.

I only write this down because it causes so much pain. It involves so much loss that in the moment, when I awake with no desire to rush for a pen, it’s hard to see the value in what is happening. But I do, sad as I feel. I have seen other writers, my friends, struggle, failing to understand that losing the ability to write is part of life and not only a loss. To achieve the kind of comfort and peace I have now means losing what I had when I was young.

I also find that, as I age, it’s so much easier to repeat what I have said before. I have told so many stories. I still remember them. I like to tell them. They are like tapes in my head I can rewind and play back at any moment. But they are old stuff, not new. When was the last time I had a new thought? Maybe this morning, when I thought about this and decided I needed to write it down.

I haven’t felt the need to write something down in months and months, probably longer. This morning in despair, in boredom, in exasperation with myself, I thought about the fact that I am telling the same stories, thinking the same thoughts, over and over – without reaching for the new. Because it is easier. Because there is such a store of them – stories, ideas, words. So I wanted to write this new thought down. 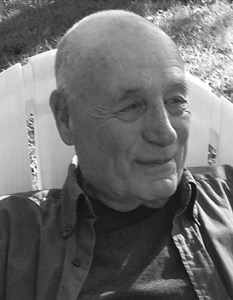 Edward M. Cohen’s story collection, “Before Stonewall,” won the Awst Press Book Award. His novel, “$250,000,” was published by G.P. Putnam’s Sons; his novella, “A Visit to my Father with my Son,” by Running Wild Press; his chapbook, “Grim Gay Tales,” by Fjords Review.