Erika Michael writes about her poem, Entanglement: ‘Since the death of my husband Ernie in 2013, I’ve sensed signs of his continued presence in the cosmos and in my world. I’ve found the idea of Quantum Entanglement in physics, with its concept of superposition, the notion that something might exist in a dual state such as, for example, both dead and alive, a fascinating metaphor for the ongoing spiritual interactions in my perception of an existential continuity. The poem, Entanglement, divulges the drift of my cosmic exchanges during difficult months of sequestering, when ‘spooky action from afar’ seems to me something like an interface with stardust.’

This plague — not a new thing.
There’s that old air, ring around a
rosie’s what the kids sing, relic

of some passé playbook, look —
there’s the two of us, crucial stuff,
you departed, poof, but it’s the

‘tis of thee’ — can’t get enough
of that spooky action from afar,
my song caught in your harmonic

strings, don’t know exactly where
you are. I strum bare maple branches
in the mist over the Sound and I

pecking at a crumb, the eagle sentry
of a shrouded bough, his white head
pivots — I know that you receive me.

Daffodils arc to the light collecting
cosmic bits beside a pond and there
you are, a boat with mirror image

and a trail of wake. I’ll be awake
a while, a rainbow vapor as fog thins.
I’m quantum spin and cosmic shift.

Entanglement’s my game. My
interactions drift in the debris of
big bang background noise, you

get the riff. You spin clockwise
I spin counter-clockwise. Novel
hit gone viral — these corona blues,

playin’ ‘find the hidden kitty’ bop
n’ waitin’ for a signal from that
interstellar whistlestop. 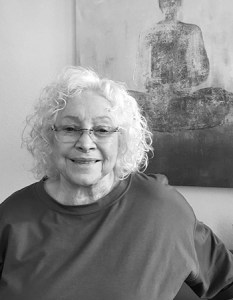 Erika Michael has a Ph.D. in Art History from the University of Washington and has taught at Trinity University in San Antonio, Oregon State in Corvallis, and the University of Puget Sound. She has participated in extended workshops with Carolyn Forché, the late Thomas Lux, Linda Gregerson, Laure-Anne Bosselaar, Tim Siebles, Major Jackson, and Jeffrey Levine. Her work has appeared in Poetica Magazine, Cascade, Drash: Northwest Mosaic, Mizmor l’David Anthology, Bracken Magazine, The Winter Anthology, The Institute for Advanced Study Letter, and Belletrist Magazine. In 2019 she was awarded first prize in the Ekphrastic Poetry Competition at the Palm Beach Poetry Festival. She reads her work at numerous venues around the Pacific Northwest and elsewhere.