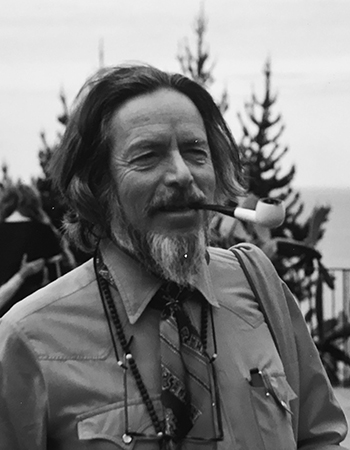 When the 11th-century poet Milarepa wrote: ‘When I look back at my clinging mind, / It appears like a short-lived sparrow in the woods – / Homeless, and with nowhere to sleep,’ he was describing the state of mind that wants to grasp and hold on to ideas, narratives, objects and relationships. At the core of the Zen viewpoint is the principle that since all things change, there is nothing that can be preserved or maintained in this way. To be living is to be in flux and all the time moving towards death, and what we are invited to do through Zen teaching is move in step with it. In this excerpt from his book, The Spirit of Zen, philosopher and religious scholar Alan Watts unpacks the imperative not to hold on to things, but to adopt a kind of psychological poverty—or simplicity— in which the mind is clear and unfettered in a way that allows it the space for true spontaneity.

Just as no person can possess life, so no idea which a person may possess can define it; the idea of possession is illusory, for apart from the fact that all things must eventually pass away into some other form, and can never remain in one place for eternity, at the root of possession lies the desire that things shall not alter in any way, and this is a complete impossibility. If, therefore, life can never be grasped, how can it ever be understood? How can truth be known if it can never be defined? Zen would answer: by not trying to grasp or define it, and this is the fundamental Buddhist ideal of non-attachment, or the Taoist ideal of wu-wei.

But Buddhism and Taoism go further than saying that nothing can ever be possessed; they declare that those who try to possess are in fact possessed, they are slaves to their own illusions about life. Spiritual freedom is just that capacity to be as spontaneous and unfettered as life itself, to be ‘as the wind that bloweth where it listeth and thou hearest the sound thereof but cannot tell whence it cometh nor whither it goeth.’ ‘Even so,’ said Jesus, ‘is everyone that is born of the Spirit.’ But non-attachment does not mean running away from things to some peaceful hermitage, for we can never escape from our own illusions about life; we carry them with us, and if we are afraid of them and wish to escape it means that we are doubly enslaved. For whether we are content with our illusions or frightened of them, we are equally possessed by them, and hence the non-attachment of Buddhism and Taoism means not running away from life but running with it, for freedom comes through complete acceptance of reality. Those who wish to keep their illusions do not move at all; those who fear them run backwards into greater illusions, while those who conquer them ‘Walk on’.

Thus the poverty of the Zen disciple is the negative aspect of his spiritual freedom; he is poor in the sense that his mind is not encumbered with material and intellectual impedimenta—the significant Latin word for ‘baggage’. This state of mind is the realization of the Mahayana doctrine of sunyata, of the emptiness of all transitory things; nothing can be grasped, for everything is emptiness; nor is there anything which can grasp, for the self is emptiness.

Whether we are content with our illusions or frightened of them, we are equally possessed by them, and hence the non-attachment of Buddhism and Taoism means not running away from life but running with it, for freedom comes through complete acceptance of reality.

Therefore the Yuen-Chioh Sutra declares that all component things are ‘like drifting clouds, like the waning moon, like ships that sail the ocean, like shores that are washed away’, and the Zen masters, realizing the evanescence of the outer world, of their own ideas and of the ego itself, cease to cling to these passing forms. In the words of the Dhammapada they are ‘those who have no possessions … who have realized the causeless and unconditioned freedom through understanding the emptiness of that which passes away—the track of these men it is impossible to trace just as the track of birds in the sky cannot be followed.’ For the Zen life does not move in ruts; it is the freedom of the Spirit, unfettered by external circumstances and internal illusions. Its very nature is such that it cannot be described in words, and the nearest we can get to it is by analogy. It is like the wind moving across the face of the earth, never stopping at any particular place, never attaching itself to any particular object, always adapting itself to the rise and fall of the ground. If such analogies give the impression of a dreamy laissez faire, it must be remembered that Zen is not always a gentle breeze, like decadent Taoism; more than often it is a fierce gale which sweeps everything ruthlessly before it, an icy blast which penetrates to the heart of everything and passes right through to the other side! The freedom and poverty of Zen is to leave everything and ‘Walk on’, for this is what life itself does, and Zen is the religion of life.

Therefore the masters tell their disciples to forget all that they have ever learnt before coming to the practice of Zen, to forget even their knowledge of Buddhism. For the Buddha himself declared that his teaching was only a raft with which to cross a river; when the opposite bank has been reached it must be left behind, but so many of his followers mistook the raft for the opposite bank. Yet this negative aspect of Zen, this giving up, is only another way of expressing the positive fact that to give up everything is to gain all. ‘He that loseth his life shall find it.’