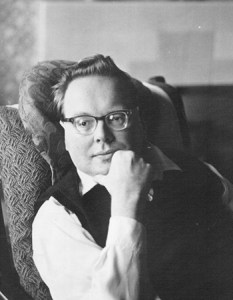 “Learn to fear. To share fear is the greatest bond of all. The hunter must become the thing he hunts. What is, is now, must have the quivering intensity of an arrow thudding into a tree.”

Sometimes described as England’s greatest cult book, The Peregrine is a beautiful, lyrical expression of one man’s fascination with this hunting bird that he came to know intimately on a daily basis for over a decade. This following excerpt comes from the first pages in the book in which J.A. Baker sets the stage for the diary that follows, and in which he begins to describe one principle that evolves throughout the book, the concept of love as becoming, of how one merges with the object of one’s fascination and slowly uncovers it in an instinctive and somatic way. In seeking out the peregrine, Baker had in some ways to emulate the bird that was itself a hunter. The hunt here necessitates an intimacy with fear, the quality that this remarkable bird arouses in its prey; Baker reflects on the necessity of understanding fear and the mind of the prey if one is to be a truly capable hunter.

I saw my first peregrine on a December day at the estuary ten years ago. The sun reddened out of the white river mist, fields glittered with rime, boats were encrusted with it; only the gently lapping water moved freely and shone. I went along the high river-wall towards the sea. The stiff crackling white grass became limp and wet as the sun rose through a clear sky into dazzling mist. Frost stayed all day in shaded places, the sun was warm, there was no wind.

I rested at the foot of the wall and watched dunlin feeding at the tide-line. Suddenly they flew upstream, and hundreds of finches fluttered overhead, whirling away with a ‘hurr’ of desperate wings. Too slowly it came to me that something was happening which I ought not to miss. I scrambled up, and saw that the stunted hawthorns on the inland slope of the wall were full of fieldfares. Their sharp bills pointed to the north-east, and they clacked and spluttered in alarm. I followed their point, and saw a falcon flying towards me. It veered to the right, and passed inland. It was like a kestrel, but bigger and yellower, with a more bullet-shaped head, longer wings, and greater zest and buoyancy of flight. It did not glide till it saw starlings feeding in stubble, then it swept down and was hidden among them as they rose. A minute later it rushed overhead and was gone in a breath into the sunlit mist. It was flying much higher than before, flinging and darting forwards, with its sharp wings angled back and flicking like a snipe’s.

This was my first peregrine. I have seen many since then, but none has excelled it for speed and fire of spirit. For ten years I spent all my winters searching for that restless brilliance, for the sudden passion and violence that peregrines flush from the sky. For ten years I have been looking upward for that cloud-biting anchor shape, that crossbow flinging through the air. The eye becomes insatiable for hawks. It clicks towards them with ecstatic fury, just as the hawk’s eye swings and dilates to the luring food-shapes of gull and pigeons.

To be recognised and accepted by a peregrine you must wear the same clothes, travel by the same way, perform actions in the same order. Like all birds, it fears the unpredictable. Enter and leave the same fields at the same time each day, soothe the hawk from its wildness by a ritual of behaviour as invariable as its own. Hood the glare of the eyes, hide the white tremor of the hands, shade the stark reflecting face, assume the stillness of a tree. A peregrine fears nothing he can see clearly and far off. Approach him across open ground with a steady unfaltering movement. Let your shape grow in size but do not alter its outline. Never hide yourself unless concealment is complete. Be alone. Shun the furtive oddity of man, cringe from the hostile eyes of farms. Learn to fear. To share fear is the greatest bond of all. The hunter must become the thing he hunts. What is, is now, must have the quivering intensity of an arrow thudding into a tree. Yesterday is dim and monochrome. A week ago you were not born. Persist, endure, follow, watch.

For ten years I spent all my winters searching for that restless brilliance, for the sudden passion and violence that peregrines flush from the sky. For ten years I have been looking upward for that cloud-biting anchor shape, that crossbow flinging through the air. The eye becomes insatiable for hawks.

Hawk-hunting sharpens vision. Pouring away behind the moving bird, the land flows out from the eye in deltas of piercing colour. The angled eye strikes through the surface dross as the obliqued axe cuts to the heart of the tree. A vivid sense of place glows like another limb. Direction has colour and meaning. South is a bright, blocked place, opaque and stifling; West is a thickening of the earth into trees, a drawing together, the great beef side of England, the heavenly haunch; North is open, bleak, a way to nothing; East is a quickening in the sky, a beckoning of light, a storming suddenness of sea. Time is measured by a clock of blood. When one is active, close to the hawk, pursuing, the pulse races, time goes faster; when one is still, waiting, the pulse quietens, time is slow. Always, as one hunts for the hawk, one has an oppressive sense of time contracting inwards like a tightening spring. One hates the movement of the sun, the steady alteration of the light, the increase of hunger, the maddening metronome of the heart-beat. When one says ‘ten o’clock’ or ‘three o’clock, this is not the grey and shrunken time of towns; it is the memory of a certain fulmination or declension of light that was unique to that time and that place on that day, a memory as vivid to the hunter as burning magnesium. As soon as the hawk-hunter steps from his door he knows the way of the wind, he feels the weight of the air. Far within himself he seems to see the hawk’s day growing steadily towards the light of their first encounter. Time and the weather hold both hawk and watcher between their turning poles. When the hawk is found, the hunter can look lovingly back at all the tedium and misery of searching and waiting that went before. All is transfigured, as though the broken columns of a ruined temple had suddenly resumed their ancient splendour.

I shall try to make plain the bloodiness of killing. Too often this has been slurred over by those who defend hawks. Flesh-eating man is in no way superior. It is so easy to love the dead. The word ‘predator’ is baggy with misuse. All birds eat living flesh at some time in their lives. Consider the cold-eyed thrush, that springy carnivore of lawns, worm stabber, basher to death of snails. We should not sentimentalise his song, and forget the killing that sustains it.