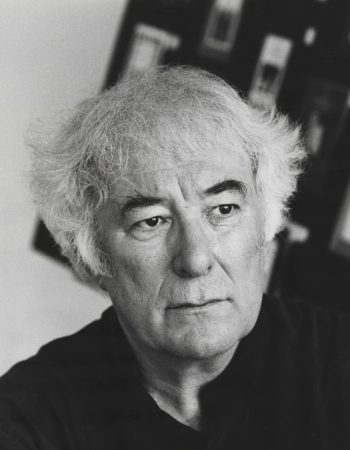 “I loved the disappearance of the spokes,
The way the space between the hub and rim
Hummed with transparency. If you threw
A potato into it, the hooped air
Spun mush and drizzle back into your face;”

This very personal and autobiographical poem of Seamus Heaney’s harks back to the objects and curiosities of his youth and an inquisitive spirit that turned things on their heads and skewed their purpose in order to feel them and understand them better. The ‘preternatural’ speed of his bicycle wheel, which entered him like ‘an access of free power’ and ‘spun the objects of belief / In an orbit coterminous with longing.’ The second part of the poem sees him take his tests a step further, into the mud and ooze of the nearby well where he creates an extraordinary spectacle by spinning mud into transcendent clouds. ‘Enough was not enough’ and eventually his forays into the power of the centrifugal force ended with his bike breaking, putting an end to his experiment and the sense of wonder, which was only re-awoken after some time at the hands of pirouetting cowgirls in a circus ring.

The first real grip I ever got on things
Was when I learned the art of pedaling
(By hand) a bike turned upside down, and drove
Its back wheel preternaturally fast.
I loved the disappearance of the spokes,
The way the space between the hub and rim
Hummed with transparency. If you threw
A potato into it, the hooped air
Spun mush and drizzle back into your face;
If you touched it with a straw, the straw frittered.
Something about the way those pedal treads
Worked very palpably at first against you
And then began to sweep your hand ahead
Into a new momentum—that all entered me
Like an access of free power, as if belief
Caught up and spun the objects of belief
In an orbit coterminous with longing.

II
But enough was not enough. Who ever saw
The limit in the given anyhow?
In fields beyond our house there was a well
(‘The well’ we called it. It was more a hole
With water in it, with small hawthorn trees
On one side, and a muddy, dungy ooze
On the other, all tramped through by cattle).
I loved that too. I loved the turbid smell,
The sump-life of the place like old chain oil.
And there, next thing, I brought my bicycle.
I stood its saddle and its handlebars
Into the soft bottom, I touched the tyres
To the water’s surface, then turned the pedals
Until like a mill-wheel pouring at the treadles
(But here reversed and lashing a mare’s tail)
The world-refreshing and immersed back wheel
Spun lace and dirt-suds there before my eyes
And showered me in my own regenerate clays.
For weeks I made a nimbus of old glit.
Then the hub jammed, rims rusted, the chain snapped.

III
Nothing rose to the occasion after that
Until, in a circus ring, drumrolled and spotlit,
Cowgirls wheeled in, each one immaculate
At the still centre of a lariat.
Pepetuum mobile. Sheer pirouette.
Tumblers. Jongleurs. Ring-a-rosies. Stet!