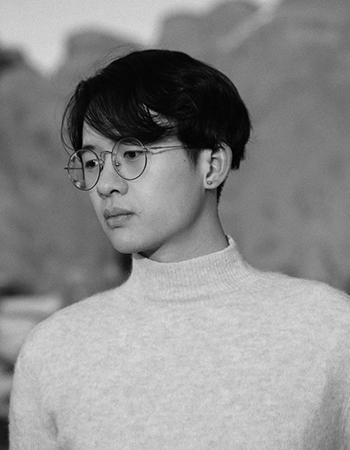 “Whether 无 emptiness is equivalent to 空 nothingness is a question
this child will consider in twelve years when he becomes a youth monk
in the temple nearest his hometown….”

Shangyang Fang is a poet who was born in Chengdu in China, and he writes his poetry in both English and Chinese. This beautiful and complex poem, Chaconne, addresses the question of sin and redemption against the background of a young monk entering a monastery. The poem features in Fang’s debut collection, Burying the Mountain, which will be released in October 2021.

Whether 无 emptiness is equivalent to 空 nothingness is a question
this child will consider in twelve years when he becomes a youth monk
in the temple nearest his hometown. But this afternoon, let him be
a child, let him drown the ants with his spit, knead their gasters till
his fingers are stained with their dark liquid, which he licks clean & whose
bitterness will stick on his tongue as long as his tongue is red as his kāṣāya.

Tonight, as this youth monk repents his sins—of killing two soldiers
who stabbed his mother in her womb, his unborn sister—he thinks that
the two bullets he planted in the soldiers’ scalps with the touch of his
forefinger are as exquisite as the ants. He cannot understand that adding
twelve grams of metal to the bodies of two young men his age could stop
them from breathing; just as he could not understand the ants’ death.

The temple, built in the Song dynasty, is made of pine wood, splendid
on the outside, while on the inside there is as much vacantness as
completion. The perennial scent of incense, the oil lamps’ green fire
burning like jade beads, fill just enough of the absent presence, enough
to accommodate both the ants and soldiers behind the draped eyelids
of the young monk, who is still, in fact, a child, who toys with his prayer
beads and chants the sūtras as some sad love songs. He knows by heart,

even though he refuses to know, the teaching of The Diamond Sūtra, he
knows that 无 emptiness, contingent upon the fabric of impermanence,
exists while 空 nothingness, as it is, doesn’t. His heart is a hole. As he
repents, tears stream from his pupils, black as the ants, leaden as the bullets
that had perforated (quiet resemblance to 空 nothingness) the soft flesh
of two boys who had hollowed his mother’s womb. 空 nothingness—
if it did not happen, if the cavities could be filled—does not exist.

He tries to go back to the afternoon to save the ants from his own fingers.
He tries so hard that he becomes one of the ants, and from the ant’s eyes
he sees that beside this killing, there is a cluster of lilies, tear-streaked,
shivering in the wind, which look almost like the face of his unborn
sister, of whom he dreams nightly. And the emptiness of lilies’ slim
bodies somehow replaces the space that once resided in nothingness.

Shangyang Fang
From Burying the Mountain. Used with permission from Copper Canyon Press. 2021.