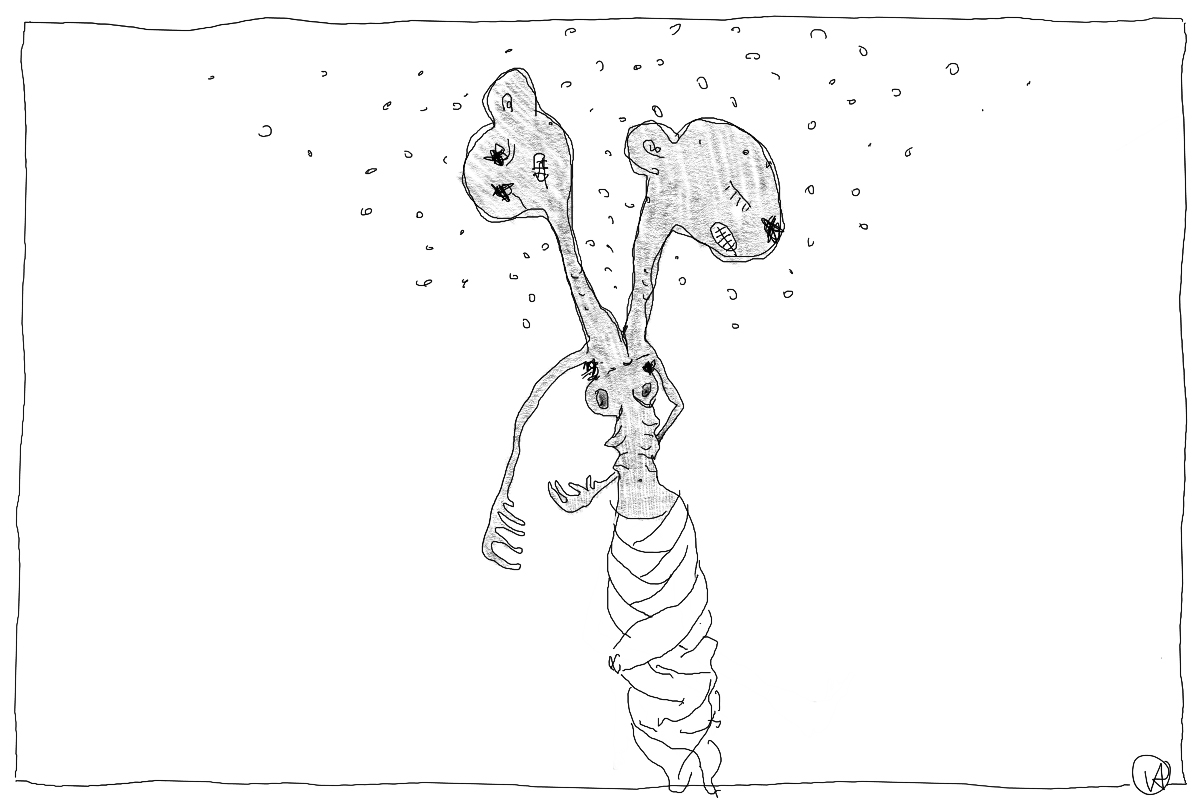 GRIEF IS NOT SOMETHING you expect to come.  One time, it came while I was sitting in a grocery store parking lot waiting on my family to emerge with bags full of delicious food for dinner when I received a devastating phone call about the passing of a loved one.  Another time, it came when I woke up at six in the morning to my dog crying, having no idea that would be the last time I’d see him. But other times it comes in ways that aren’t so clear; where people don’t send sympathy cards or plants, and the feelings of loneliness are overwhelming. This time I was grieving myself and the life I thought I was going to have.

“What do you think of two women getting married?” My grandmother asked me this when I was in middle school. We were in the car, coming home late at night. I was in the process of trying to convince her to let me audition for an art school, which would mean leaving my private Christian school.

The question puzzled me, probably more than it should have. I’d never thought about it before, which by middle school was unusual. I ran through it in my mind, wondering why two women would want to do that. I could find nothing wrong with it. “I don’t know,” I said. “I guess it’s okay.”

This launched my grandmother into a series of follow-up questions such as, how would they have kids? Would you want to be raised by two women? And then the best one: how would God feel about it? For someone who had just been introduced to this idea five minutes ago, I was sure expected to have a textbook of backup for my statement.

“You know you have a female cousin out in California who’s a preacher. She married a woman and then they had a son together who decided he wanted to be female too.”

This was news to me. “How come I’ve never heard of them?” I asked.

“No one wants to have anything to do with them. Do you blame them?” It was a rhetorical question, and at the time I didn’t have an answer.

“Of course not,” I replied, doing nothing but agreeing.

“They’ll try to give you reasons as to why being ‘gay’ is okay. She began prepping me for arguments strangers would throw at me so I could defend the bible.

This was the first time I heard about gay rights.

“You’re not gay,” I told myself in my head over and over, not even a year later. “Friends can be really close.” I wasn’t wrong by saying that, but that didn’t mean the statement was true in that context.

“Do you feel that way about her?” my friend asked me one day. She was one my closest friends at the time, watching me slowly fall in love with one of our other mutual friends.

My immediate response was panic and a rushed, “Of course not.” It was as if it was the obvious thing in the world to me, and her lack of judgment almost offended me.

“All right,” she said, not really believing me, but not wanting to push the issue. I believed myself, though.

Being anything but straight just wasn’t on the cards for me.

Self-hatred and anger tend to fit together like two puzzle pieces. “Stop it,” I told myself. “Just stop it.” Everyone’s words rang in my mind, a mixture of my family and people at church, that all mashed together to make my own, cruel voice.

‘Same sexes can’t really feel that way about each other. It’s confusing a really good friendship with something else.’

‘It’s an abomination. Marriage is between a man and woman.’

‘We were made to be holy, not happy.’

I found myself joining in on the jokes at church, bitterness lacing with my words. I directed it out at other people, but it wasn’t at anyone but myself. The jokes let me verbalize the voice in my head.

I was angry with myself because when I looked in the mirror, I was convinced I wasn’t reflecting what a Christian was supposed to be: faithful and repentant. My love didn’t fit God’s definition of marriage.

Instead, when I looked in the mirror, I saw all the touches from a lover I wasn’t meant to have, but couldn’t let go of. I saw a sadness from seeing beauty in the world, but failing to understand why God’s love was conditional.

I saw myself growing into someone I wasn’t meant to be, and I hated myself for it.

“I can’t say it’s right, but I can’t say it’s wrong,” I said to my friend on the phone, nearly in tears. “I can’t say that love is wrong, but I just can’t say that this is right.” A constant debate was going on inside my head. Every night I went to sleep my mind felt frazzled, like I had just taken a standardized test. It came up every day and almost every conversation I had with people.

Nothing anyone said was enough for me.

“I wish I could give you all the answers,” my friend said, with that being the only thing she could say. She herself didn’t see an issue with what I was going through, but could see the war I was waging inside.

“I’m only dating a girl because I fell in love,” I would say. “I’d date guys if we broke up.” I thought that if I was right in normal circumstances it could make up for what I was doing wrong.

I sat on the bus in the late afternoon from a tiring day at school. The air was just starting to warm up after the frigid winter months and I thought to myself how beautiful God had made nature. The sudden pang of guilt hit me; I didn’t have the right to think those things when I was doing something so awful. But how awful was it if it was coming from a place of love? I turned my head up to the sky, only to be met by grey ceiling of a shaking bus.

“Please, give me a sign,” I begged. “Anything. I’ll do anything if you’ll let me have this.”

A boy I often sat with on the bus was just off to my right. After noticing my glance at him, he decided to strike up conversation. “I saw you with that emo girl in the atrium today. Are you guys together?” A lump formed in my throat as I didn’t know what to say.

“Yeah, I suppose we are.” I let the words hang in the air for a moment before the panic made me start talking again. “But it’s not like I’d do this with anyone else—I’m straight, I just really love her.”

“I’m not sure it works that way.” He seemed amused by me. “I thought you were a Christian.” That was it, something I had been dreading; people questioning my faith because of my choices.

“Then why are you doing this? You know it’s not God’s will.” I spent the entirety of the rest of the bus ride trying to get him to follow me through my logic, that I could wash away all my sins because of a love like this. He wasn’t buying it. Neither was I. There was no way I going to be able to barter myself out of this one.

Compromising doesn’t work because it doesn’t change the truth of the matter.

“I’m going to hell,” I thought to myself every day. Sundays were worse than any other day. I walked into church hearing what was going to happen to me, but knowing I didn’t want to change.

I remember sitting in Sunday school, not speaking while a discussion was happening. “We need to be out there,” someone said. “There are so many corrupt things taking over America and not enough churches want to tell people the truth because they’re too afraid they’ll offend someone. But we need to be out there spreading the truth! Or else more and more states are going to keep legalizing things like same-sex marriages! It’s sad we’ve fallen so far from the image of God that people are willing to indulge in something like that.”

I didn’t cry at his words until I went home, and I sank down onto the floor in front of my dresser with my hands over my mouth, choking on my breath. I couldn’t deny it and I couldn’t compromise for something that wasn’t changing. All I had left to do was to take on the harsh reality of my beliefs in defeat.

Happiness can only exist within acceptance. It doesn’t happen overnight. There is no moment of realization. Some days I went to sleep crying, and others I went the whole day without thinking about it. Then some days my mind would allow the good to seep into my perspective.

One day I was walking down the hall with a friend and we passed a gay couple holding hands and leaning against the wall. My friend smiled and said they were cute.

I looked at the way they laughed together at a joke I hadn’t heard. Their hands clasped together in an expression of love. They were free and they loved each other. It was actually that simple. That love was not harmful, it was not offensive, and it was not different than anyone else’s.

Eventually the voices stopped and I could think for myself for the first time.

I had been looking outside of myself, to others, for an answer only I had for a life that only I could live. In that moment I had found it; my love was not conditional, did not need the approval of others, and was not a bad thing.

After that, I could breathe. 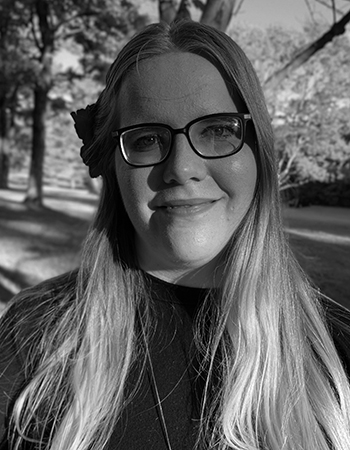 Danielle Bain, 22, is a recent graduate of Point Park University with a bachelor’s degree in Cinema Production and a minor in Creative Writing. In her four years at Point Park she has produced over ten short films and documentaries, and has written over 30 creative works. Her works usually focus on social change or awareness such as producing, directing and writing the award winning short documentary for charter school rights, A Tax Dollar More. Danielle is extremely honored to be representing her story with The Dewdrop.