AS I AGE I FIND I CAN NO LONGER enter certain rooms. I see backspaces inhabited by specters of a world fading into my past. A claustrophobia of memories jammed with false faces, hangers, hats and hang-ups that fill me with the remembered scents of sweat and worn clothes.

The onus of insecurities, (mine, theirs), are reflected in the mirrors that line the walls of too small, crowded rooms. I clearly recognize the disguised smiles, charades of friendships, easily bruised egos served in an olio of the playwright’s words.

This used to be my territory, a place to step into someone else. I had often thought when a character was violent, depressed, suicidal or bereft, that what I did was not unlike the Aztecs who wore the flayed skin of their vanquished enemies. We were travelers in a universe of pretend who carried baggage told as someone else’s truths. The words I spoke, the actions I took, the vulnerabilities I shared were conceived by someone who told their story through my body.

My stance was with a foot in both worlds, role me and real me, in front of an audience seeking to believe. After the last scene, last bows, faded echoes of applause, I would unclasp the arms of my character from around my neck and waist where she had piggybacked for an hour or two. I would return alone to search by the light of the ghost lamp for any part of me left onstage.

I no longer carry someone else’s visions. What I now share are my own words, an ever changing collage of my pieces. In my seventh decade I have finally recognized I own me and I stand as witness to the choices I made and continue to make. 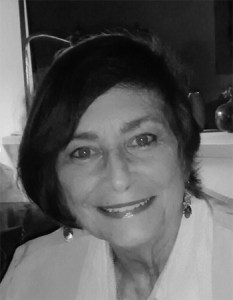 Charlene Moskal is a Teaching Artist with The Alzheimer’s Poetry Project in Las Vegas, Nevada. Her writing is in numerous anthologies, print magazines, and online. Her second poetry chapbook is One Bare Foot (Zeitgeist Press), with a third, Leavings From My Table, forthcoming from Finishing Line Press in 2022. She is in her seventh decade, laughs a lot and really likes coffee ice cream hot fudge sundaes.