MY FAMILY NEVER went to church.  Influenced by their a-religiosity, my own understanding of the spiritual realm was purely academic right through college. I read parts of the Bible as one might read Greek or Roman mythology – as a means of understanding the society that subscribed to its beliefs, not as a means of understanding my place in the world, much less my self. It wasn’t until I was 24 that the story of Jesus of Nazareth became personal. Don’t get me wrong, mine is not a story in which I accept him as my personal lord and savior; to be honest, that phrase makes me very uncomfortable.  Rather, it was Nikos Kazantzakis’ “The Last Temptation of Christ” that changed my understanding of Christianity and my relation to it.

I vividly remember reading the book while spending a lazy weekend with my boyfriend in his grandmother’s summer home. Built in the middle of the Green Mountain Forest, the house was the nerve center of a well-known Quaker summer camp, not too far from the birthplace of Calvin Coolidge. It was the off season, so the camp was closed, his grandmother back home in Burlington, and the two of us had the place to ourselves. It was one of those dank, rainy days in autumn in which the veil between this and other worlds seemed particularly porous. Hot liquids, warm blankets, and a good book were just the thing for such a day, and though my nose was running and my fingers were cold, my imagination was on fire.

Kazantzakis vivified the passion of Jesus and brought the socio-economic moment and the radicalism of the Jews who resisted Roman rule into sharp focus. Here was fan fiction before its time, a transmogrification of the most persistent hero of western civilization. As a politically radical 20-something myself, I was rapt. Kazantzakis’ Jesus is psychologically tormented, emaciated, illiterate – a social outcast who was pitied and despised, even by his own mother. The reader is embarrassed for the wretch, whom we meet in the opening chapter.

Rather than being put off by the sacrilege (remarkably, the book was published in 1955), I was fascinated, even thrilled by it. The Last Temptation touched my own youthful passion for overthrowing the injustice and corruption embodied by the ruling class at a time when George H.W. Bush was waging war in the Middle East. And yet, the book was about much more than the historical moment. The psychology of Kazantzakis’ Jesus: his relentless wrestling with god and with the decision to focus on his own narrow life versus the well-being of the larger community was deeply timeless, and spiritual.

I finished the book with an understanding, a revelation if you will, that I too am a spiritual being. Rather than matters of the spirit being distinct from practical social struggles, as I had always thought of them, they were inextricably intertwined. Without an appreciation for the invisible and intangible essence of that which binds us together, humanity is unlikely to achieve peace or justice. Without faith that life matters, we will have no reason to come together. Spirituality, I realized, is not a distraction or an impediment to the pursuit of social justice, but is in fact a prerequisite.

But the story of the Christ, the King, the anointed one (which is exactly what the Romans called Caesar) may no longer be the right one to bring us together. According to his English translator Peter Bien, Kazantzakis sought to help modern man to “fashion a new savior and thereby rescue himself from a moral and spiritual void.” A student of Nietzsche, but also of Buddhism, Kazantzakis made “The Last Temptation of Christ” about men and women, about the earth, about resistance, about choice, about torment, about doing the right thing.

Christ’s ultimate heroism is that he acted out of love for others, rather than out of self-preservation, and he did so, in Kazantzakis’ story, as a flawed human being, not as a god. I don’t believe that the point of the story, either the original or the one told by Kazantzakis, is that Jesus died for our sins; I believe the point is that Jesus sacrificed for the greater good, even though he did not have to. Every day with every action, each of us can choose to put others first, to sacrifice, to risk, to decry injustice, to protest, to vote. These are not just political acts, they are social and spiritual acts as well. 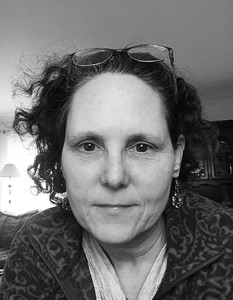 Mary Downes writes from her home in the seacoast region of New Hampshire. Poetry, essays and short stories have been her primary outlet since early 2020. In addition to writing (and re-writing), Mary is busy working an unrelated full-time job, spending time with friends and family, and foraging for mushrooms.