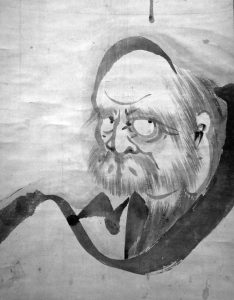 “How sad that people ignore the near
and search for truth afar,
like someone in the midst of water
crying out in thirst”

17th century Zen master Hakuin Ekaku was one of the most prominent figures in the history of Rinzai Zen, which he was credited with reviving after a period of stagnation in Japan. Hakuin – who himself came from a humble background – was actively invested in spreading his teachings to the laity and the illiterate, crystallizing Zen experience to students in a thorough and illustrative way. This teaching poem of his, The Song of Zazen or Meditation, is an encapsulation of the merits of meditation, in which he encourages the student to focus on the immediate experience of presence. There are many virtues and practices within Zen tradition, he argues, and zazen contains them all in a form that is no form and where ‘singing and dancing are the voice of the Law.’

All beings by nature are Buddha,
as ice by nature is water;
apart from water there is no ice,
apart from beings no Buddha.

How sad that people ignore the near
and search for truth afar,
like someone in the midst of water
crying out in thirst,
like a child of a wealthy home
wandering among the poor.

Lost on dark paths of ignorance
we wander through the six worlds,
from dark path to dark path we wander,
when shall we be freed from birth and death?

For this the zazen of the Mahayana
deserves the highest praise:
offerings, precepts, paramitas,
Nembutsu, atonement, practice—
the many other virtues—
all rise within zazen.

Those who try zazen even once
wipe away immeasurable crimes—
where are all the dark paths then?
The Pure Land itself is near.

Those who hear this truth even once
and listen with a grateful heart,
treasuring it, revering it,
gain blessings without end.

Much more, if you turn yourself about
and confirm your own self-nature—
that self-nature is no nature—
you are far beyond mere argument.

The oneness of cause and effect
is clear,
not two, not three, the path is put right;
with form that is no form
going and coming never astray,
with thought that is no thought
singing and dancing are the voice
of the Law.

Boundless and free is the sky of samadhi!
Bright the full moon of wisdom!
Truly is anything missing now?
Nirvana is here, before your eyes,
this very place is the Lotus Land,
this very body the Buddha.