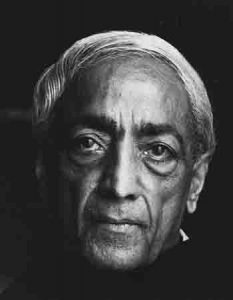 “Meditation is destruction to security and there is great beauty in meditation, not the beauty of the things that have been put together by man or by nature but of silence. This silence is emptiness in which and from which all things flow and have their being.”

Indian philosopher Jiddu Krishnamurti encouraged independent spiritual enquiry not contingent on religion and ritual. In his diaries, published as Krishnamurti’s Notebook, he followed his own ‘process’ and daily engagement with the the experience of his own consciousness and encounters with the unknown. These meditations landed him in states of boundless clarity which brought with them a physical cost that was often pain or pressure in Krishnamurti’s head. The diary entries start with an observation and appreciation of the natural world, before leading into an inner reflection of Krishnamurti’s own being and a very detailed response to the tiny fluctuations of the mind. In this passage, written on August 31st 1961 in Gstaad, Switzerland, Krishnamurti muses over the destructive power of meditation and its relationship to the purity of love and death.

Meditation without a set formula, without a cause and reason, without end and purpose is an incredible phenomenon. It is not only a great explosion which purifies but also it is death, that has no tomorrow. Its purity devastates, leaving no hidden corner where thought can lurk in its own dark shadows. Its purity is vulnerable; it is not a virtue brought into being through resistance.

It is pure because it has no resistance, like love. There is no tomorrow in meditation, no argument with death. The death of yesterday and of tomorrow does not leave the petty present of time, and time is always petty, but a destruction that is the new. Meditation is this, not the silly calculations of the brain in search of security. Meditation is destruction to security and there is great beauty in meditation, not the beauty of the things that have been put together by man or by nature but of silence. This silence is emptiness in which and from which all things flow and have their being. It is unknowable, neither intellect nor feeling can make their way to it; there is no way to it and a method to it is the invention of a greedy brain. All the ways and means of the calculating self must be destroyed wholly; all going forward or backward, the way of time, must come to an end, without tomorrow. Meditation is destruction; it’s a danger to those who wish to lead a superficial life and a life of fancy and myth.

There’s no profit in knowing death but strangely death and love always go together: they never separate. You can’t love without death: you can’t embrace without death being there.

The stars were very bright, brilliant so early in the morning. Dawn was far away; it was surprisingly quiet, even the boisterous stream was quiet and the hills were silent. A whole hour passed in that state when the brain was not asleep but awake, sensitive and only watching; during that state the totality of the mind can go beyond itself, without directions for there is no director. Meditation is a storm, destroying and cleansing. Then, far away, came dawn. In the east there was spreading light, so young and pale, so quiet and timid; it came past those distant hills and it touched the towering mountains and the peaks. In groups and singly, the trees stood still, the aspen began to wake up and the stream shouted with joy. That white wall of a farm-house, facing west, became very white. Slowly, peacefully, almost begging it came and filled the land. Then the snow peaks began to glow, bright rose and the noises of the early morning began. Three crows flew across the sky, silently, all in the same direction; from far came the sound of a bell on a cow and still there was quiet. Then a car was coming up the hill and day began.

On that path in the wood, a yellow leaf fell; for some of the trees autumn was here. It was a single leaf, with not a blemish on it, unspotted, clean. It was the yellow of autumn, it was still lovely in its death, no disease had touched it. It was still the fullness of spring and summer and still all the leaves of that tree were green. It was death in glory. Death was there, not in the yellow leaf, but actually there, not an inevitable traditionalized death but that death which is always there. It was not a fancy but a reality that could not be covered up. It is always there round every bend of a road, in every house, with every god. It was there with all its strength and beauty.

Do we know what love is? Never knowing it is the wonder of it, the beauty of it. Never knowing, which does not mean remaining in doubt nor does it mean despair; it’s the death of yesterday and so the complete uncertainty of tomorrow.

You can’t avoid death; you may forget it, you may rationalize it or believe that you will be reborn or resurrected. Do what you will, go to any temple or book it is always there, in festival and in health. You must live with it to know it; you can’t know it if you are frightened of it; fear only darkens it. To know it you must love it. To live with it you must love it, The knowledge of it isn’t the ending of it. It’s the end of knowledge but not of death. To love it is not to be familiar with it; you can’t be familiar with destruction. You can’t love something you don’t know but you don’t know anything, not even your wife or your boss, let alone a total stranger. But yet you must love it, the stranger, the unknown. You only love that of which you are certain, that which gives comfort, security. You do not love the uncertain, the unknown; you may love danger, give your life for another or kill another for your country, but this is not love; these have their own reward and profit; gain and success you love though there’s pain in them. There’s no profit in knowing death but strangely death and love always go together: they never separate. You can’t love without death: you can’t embrace without death being there. Where love is there is also death, they are inseparable.

But do we know what love is? You know sensation, emotion, desire, feeling and the mechanism of thought but none of these is love. You love your husband, your children; you hate war but you practice war. Your love knows hate, envy, ambition, fear; the smoke of these is not love. Power and prestige you love but power and prestige are evil, corrupting. Do we know what love is? Never knowing it is the wonder of it, the beauty of it. Never knowing, which does not mean remaining in doubt nor does it mean despair; it’s the death of yesterday and so the complete uncertainty of tomorrow. Love has no continuity, nor has death. Only memory and the picture in the frame have continuity but these are mechanical and even machines wear out, yielding place to new pictures, new memories. What has continuity is ever decaying and what decays isn’t death. Love and death are inseparable and where they are there’s always destruction.