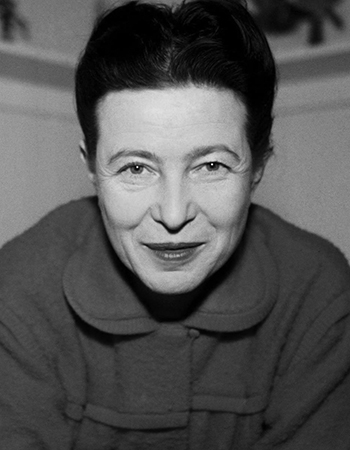 “What is beyond doubt is that until now women’s possibilities have been stifled and lost to humanity, and in her and everyone’s interest it is high time she be left to take her own chances.”

Simone de Beauvoir’s book, The Second Sex, was published in 1949 and continues to stand as a seminal feminist text. In the course of the essays that make up the book, de Beauvoir calls for the full emergence of women in social, economic, political and artistic realms. In this passage taken from the chapter The Independent Woman, she questions the concept of genius and why it is that there have been so few influential female artists through time, much like Virginia Woolf did in A Room of One’s Own. One needs first to live, to be free, not to have to struggle to survive, she argues, before one can metabolize and express one’s reality through creative means. It was de Beauvoir’s assertion that women were limited in their situation and not in some mysterious essence of their being, and that it was imperative, not just for women, but for society as a whole, that a revolution occur in that state of limitations.

Men we call great are those who—in one way or another—take the weight of the world on their shoulders; they have done more or less well, they have succeeded in re-creating it or they have failed; but they took on this enormous burden in the first place. This is what no woman has ever done, what no woman has ever been able to do. It takes belonging to the privileged caste to view the universe as one’s own, to consider oneself as guilty of its faults and take pride in its progress; those alone who are at the controls have the opportunity to justify it by changing, thinking, and revealing it; only they can identify with it and try to leave their imprint on it. Until now it has only been possible for Man to be incarnated in the man, not the woman. Moreover, individuals who appear exceptional to us, the ones we honor with the name of genius, are those who tried to work out the fate of all humanity in their particular lives. No woman has thought herself authorized to do that. How could van Gogh have been born woman? A woman would not have been sent on mission to Borinage, she would not have felt men’s misery as her own crime, she would not have sought redemption; so she would never have painted van Gogh’s sunflowers.

And this is without taking into account that the painter’s kind of life—the solitude in Arles, going to cafés, whorehouses, everything that fed into van Gogh’s art by feeding his sensibility—would have been prohibited to her. A woman could never have become Kafka: in her doubts and anxieties, she would never have recognized the anguish of Man driven from paradise. Saint Teresa is one of the only women to have lived the human condition for herself, in total abandonment: we have seen why. Placing herself beyond earthly hierarchies, she, like Saint John of the Cross, felt no reassuring sky over her head. For both of them it was the same night, the same flashes of light, in each the same nothingness, in God the same plenitude. When finally it is possible for every human being to place his pride above sexual differences in the difficult glory of his free existence, only then will woman be able to make her history, her problems, her doubts, and her hopes those of humanity; only then will she be able to attempt to discover in her life and her works all of reality and not only her own person. As long as she still has to fight to become a human being, she cannot be a creator.

Once again, to explain her limits, we must refer to her situation and not to a mysterious essence: the future remains wide open. The idea that woman has no “creative genius” has been defended ad nauseam; Mme Marthe Borély, a noted antifeminist of former times, defends this thesis, among others: but it looks as if she tried to make her books the living proof of incoherence and feminine silliness, and so they contradict themselves. Besides, the idea of a given creative “instinct” must be rejected like that of the “eternal feminine” and put away in the attic of entities. Some misogynists affirm a bit more concretely that because women are neurotic, they will never create anything of value: but these same people often declare that genius is a neurosis. In any case, the example of Proust shows clearly enough that psychophysiological imbalance does not mean powerlessness or mediocrity. As for the argument drawn from history, we have just seen what we should think of it; the historical past cannot be considered as defining an eternal truth; it merely translates a situation that is showing itself to be historical precisely in that it is in the process of changing. How could women ever have had genius when all possibility of accomplishing a work of genius—or just a work—was refused them?

“As long as she still has to fight to become a human being, she cannot be a creator.”

Old Europe formerly heaped its contempt on barbarian Americans for possessing neither artists nor writers. “Let us live before asking us to justify our existence,” Jefferson wrote, in essence. Blacks give the same answers to racists who reproach them for not having produced a Whitman or Melville. Neither can the French proletariat invoke a name like Racine or Mallarmé. The free woman is just being born; when she conquers herself, she will perhaps justify Rimbaud’s prophecy: “Poets will be. When woman’s infinite servitude is broken, when she lives for herself and by herself, man—abominable until now—giving her her freedom, she too will be a poet! Woman will find the unknown! Will her worlds of ideas differ from ours? She will find strange, unfathomable, repugnant, delicious things, we will take them, we will understand them.” Her “worlds of ideas” are not necessarily different from men’s, because she will free herself by assimilating them; to know how singular she will remain and how important these singularities will continue to be, one would have to make some foolhardy predictions. What is beyond doubt is that until now women’s possibilities have been stifled and lost to humanity, and in her and everyone’s interest it is high time she be left to take her own chances.