Since before they could talk, they knew. The fearlessness of a pre-schooler’s heart that knows no endings. 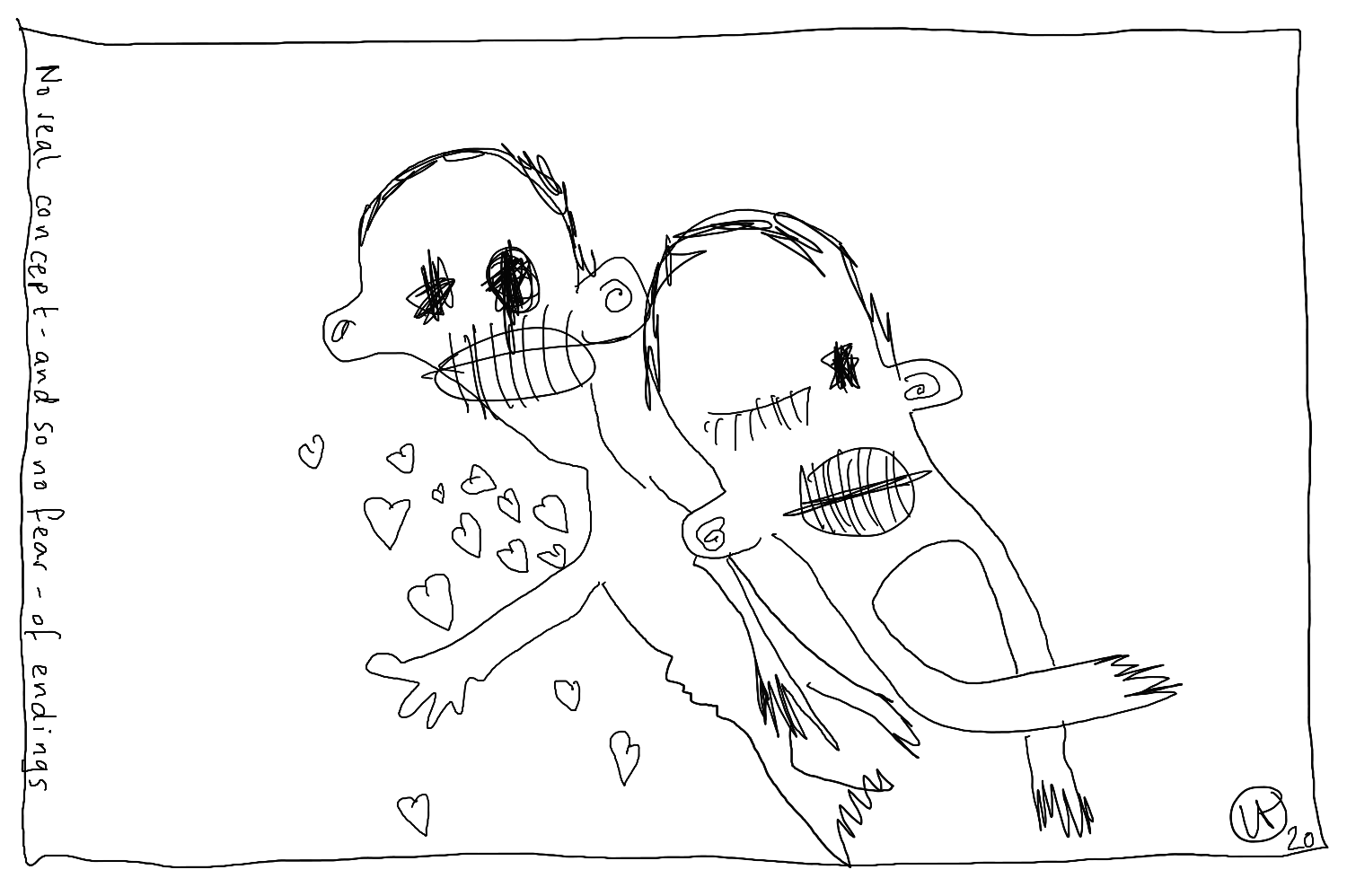 CORA IS SQUATTING on the living room floor surrounded by a storm of paper, tape, ribbon, pens and a card. She is preparing a birthday gift for her best friend Morgan, who is turning five. It is a Teen Titans costume she had me order more than a month ago.

‘Mama, what shall I write in his card?’ she asks me.

‘How about, Happy Birthday?’

She pauses, then starts scrawling. When I walk past her and try to look over her shoulder, she hunches protectively over her work. When she’s done, she hands me the card and instructs me not to read it.

I open it a tiny amount as I slip it into the envelope and I can see it doesn’t say Happy Birthday at all. It says I love you so much.

Morgan and Cora were 18 months old when they first met at a toddler’s gym. It was not an age of great communication between peers, but after some weeks, Morgan’s nanny told to me that he had been singing songs about Cora at home. He had noticed her, and he liked her. She liked him too, and I took her frenzied repetition of his name after we left the gym as an expression of her desire to see him again. We started hanging back in the park after class and soon they broke the firewall of parallel play by sharing blueberries and cheese chunks.

Gym graduated to art class, soccer class and then they started at the same preschool. Cora was enrolled full-time and Morgan came every other day. On the dark mornings of his absence, she faced her abandonment alone: when it was time for me to leave, she stuck on like a little crab, her fingers digging into my legs as she tried to climb me. But on Morgan Days, as they came to be known, she peeled right off. Leaving the house in the morning was a cinch: she stood still as I dressed her, ate her cereal with focus and even brushed her own teeth. Once at school, instead of holding on to me, she picked up her nerve and placed herself next to Morgan among a pile of wooden blocks or at the coloring table.

It was a while before I took their relationship seriously. I had become wise to the fact that in early childhood, everything changes. Food preferences, toilet habits, sleeping patterns, mood swings, favorite toys; fast flux was the new normal, and I was a keen student of this commendable lightness of being. Cora’s affection for Morgan was the first thing that started to outlast every other phase. I began to sit up.

Who was this kid? What did she see in him? Was this actually a thing? The sweet little boy with blue eyes, freckles and long, curly hair suddenly took on a whole new and fascinating aspect. I started to eye him across the room: Stay on the right side of her, pal.

I realized very quickly that Morgan was a great kid, and their pairing worked. Ages two and three were a heady time; in the grip of emotional disarray, she was easily triggered. There were moments when my husband and I despaired: ‘She’ll be a difficult woman,’ he prophesized grimly. I wanted to serve up her defense, but all I had were received truisms – she’s, you know, spirited. Better a fighter than a victim?

It rang hollow because at times it was hard to be enthused by her random exactitudes and the associated shifting rage. Being locked in a debate with her over what constituted a healthy daily dose of sugar, the right temperature of soup or how many minutes to bedtime, meant doing battle with the harshest, most defiant of opponents.

In the light of this, her connection with Morgan made sense. Calm, measured, less prone to outbursts; he accommodated her in a way that other kids didn’t. If she wanted something he had, he’d usually just give it to her. And when she could not bring herself to return the gesture, he seemed to understand. In the rocky world of emerging egos and proprietary battles, Morgan was an island of calm and acceptance for Cora. He didn’t punish her for her outbursts; he ran with them, without tripping into the pit of being pushed around. I began to admire him. And his patience paid off as change endured and Cora emerged from the tunnel of her tempestuous threes into the less volatile territory of calmer fours.

This is love that is unselfconscious, that pops up like daisies springing from the lawn. It doesn’t need to be taught or chaperoned because it hasn’t yet learned how precarious self-conscious living and loving can actually be.

‘We’d like to be able to foster their friendship,’ their teacher told me from across a long desk during a parent-teacher meeting. ‘It’s great that they get on so well. But –‘

‘Not a problem. But we are encouraging Cora to also be independent. We say, it’s great to do things with your friend, but also wonderful to do them alone, no?’

‘I suppose.’ I was compelled to defend them. ‘It seems so natural, though, don’t you think? I mean, isn’t it amazing how kids so young can be so in touch?’

The teacher smiled sadly and nodded the same way she did with the kids. ‘Yes. I suppose it’s a question of self-sufficiency—’

‘Are you going to separate them?’

‘No. Not yet. Now we just help them to also be with other children. And to make decisions on their own. It is more healthy like that, no?’

I decide to steel her. I tell Cora she and Morgan might not be in the same classroom next year. We are in the car stopped at a light and I am watching her face in the rearview. She whines and I continue to explain that they mix up the classes anyway, and that it’s good to play with other kids too. It’s all I want to say. Already I feel like a double agent, acting on behalf of an authority I disagree with. And besides, it’s just one tough truth piled on another much more sinister secret that I can’t bring myself to mention at all: Morgan’s family is planning to move to New Zealand next year or the year after. Whichever way I turn, I can’t get away from the fact that there is rupture on the horizon. Still, everything changes, I remind myself; Kindergarten is a whole other world. The beauty of how they live is that they have no real concept—and so, no fear—of endings.

I was watching them once at a birthday party in a large, crowded sports center. They were following a line walking next to one another and holding hands when Cora suddenly became anxious. Morgan was trying to appease her, but she was shaking her head and had tears in her eyes. At that moment, he stopped talking and he put his hand gently on her waist. They kept walking like this, his arm protectively around her as she leaned into him.

I can see the foundations of their emotional marrow being laid with every tender encounter. This is love that is unselfconscious, that pops up like daisies springing from the lawn. It doesn’t need to be taught or chaperoned because it hasn’t yet learned how precarious self-conscious living and loving can actually be.

Now when Cora gets to school, she leaves her bag in the cubby outside her classroom, sits down to yank off her shoes and put on her slippers, then heads inside. If she’s feeling inclined, I’ll get a kiss. Otherwise, she raises her hand in a gesture of dismissal and goes in search of Morgan. As soon as they spot one another, they lock into orbit and launch into urgent updates. They take each other in, check out each other’s clothes, shoes, stuffies. They make faces at one another. Morgan tells Cora her dress is beautiful, she tells him that his t-shirt is cool then they head off into an activity together.

At the end of the day, I shuffle through the wood chips of the playground and start the unwelcome process of extraction. Hanging from the climbing frame, or engaged in a classified exchange – can they have just five more minutes? Some days I creep in so she doesn’t see me; I practice pushing her out to sea for an imagined minute to see whether she’ll float. I watch her and see that she’s assured and confident; a self-contained player in a huddle of five-year-olds whispering conspiratorially or giving voice to some ebullient element within themselves. She loves, and can love, independent of me. There’s relief in that.

‘I love you and Daddy of course. But I love Morgan more than both of you.’

‘You love Morgan more than your parents?’

‘Of course. Morgan’s my champion.’

She shrugs. ‘He told me,’ she assures me. ‘Morgan says, he’s my champion. And I’m his champion too.’

They don’t see me behind the tree as they round the edge of the playground together. They are animated, engaged and joyful. Cora is making some kind of joke, gesturing widely with her arms and pulling a face while Morgan laughs. Then they both sprint for a few seconds until she finally spots me and acts out a show of injustice and disappointment. She stomps over in my direction, while Morgan turns the other way and takes an interest in the sand pit. As we walk towards the gate, she stops and pulls my sleeve.

‘There’s something really important I have to go and tell Morgan.’

She bolts over to him, whispers something in his ear then puts her arms around him so tightly that he has trouble reciprocating. She goes to leave, then stops and turns one more time. This time she kisses him on the lips. He’s not at all surprised. As she runs away from him and back to me, he returns to his digging. 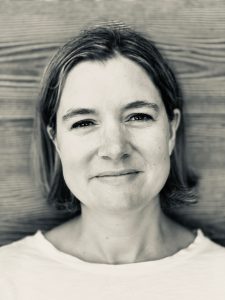 Vanessa Able is the founder and editor of The Dewdrop.