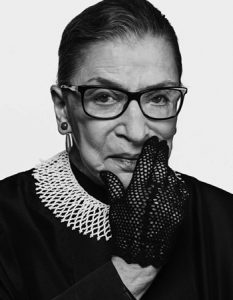 “The label liberal or conservative, any—every time I hear that, I think of the great Gilbert and Sullivan song from Iolanthe. What do those labels mean? It depends on whose ox is being gored.”

In tribute, and with gratitude, to Ruth Bader Ginsburg, here is a selection of some of her finest pieces of wisdom from a book of quotes in which she spoke of her influences – her mother, who coached her in independence and a measured approach, and her mother-in-law who encouraged selective hearing as the key to a successful marriage and a happy life. She extols the virtues of being a good teacher and a good listener and encourages those who are staking out new pathways to leave tracks, so that others can benefit from the progress they made.

[My mother] said two things: Be a lady. Be independent. “Be a lady” meant don’t give way to emotions that sap your energy, like anger. Take a deep breath and speak calmly.

What did she mean by be a lady? Well, she didn’t mean somebody who serves tea at four in the afternoon. What she meant was, a lady doesn’t waste time on unproductive emotions. A lady doesn’t snap back in anger. She isn’t envious. She is a lady—that is, if an unkind word is spoken, it’s as though she didn’t hear it.

What being independent meant: I’m certain my mother hoped that one day I would meet Prince Charming and get married and live happily ever after. But, she said, no matter whether you achieve that or not, be able to fend for yourself. And that was terrific advice.

[Marty’s] mother took me aside and said, “Dear, I would like to tell you the secret of a happy marriage.” And the secret was: it helps sometimes to be a little deaf. And with that she handed me a pair of Max earplugs, which are the best earplugs. That advice I followed through 56 years of a wonderful marriage and in every workplace, including my current job.

-on the advice she got on her wedding day, Association of Corporate Counsel, September 14, 2016

When a thoughtless or unkind word is spoken, best tune out. Reacting in anger or annoyance will not advance one’s ability to persuade.

The label liberal or conservative, any—every time I hear that, I think of the great Gilbert and Sullivan song from Iolanthe. It goes, “Every gal and every boy that’s born alive is either a little liberal or else a little conservative.” What do those labels mean? It depends on whose ox is being gored.

Think of yourself… as a teacher. So don’t react in anger, because that’s going to be counterproductive. If you call someone a sexist pig, you’ve turned him off.

It’s important to be a good listener and not to be so attached to your own view that you close your mind to another way.

My response to the distortions [in the press and public] is to try to be a teacher in whatever audience I am in, not to feel angry or frustrated, and say, here’s an opportunity to try to tell people the way it really is and hope that there will be people in the audience … who, when distortions are let out, will answer them constantly and effectively.

Don’t be shy about speaking up. Have company when you do so, so that you’re not a lone voice.

I have gotten more satisfaction out of things I did for which I was not paid as I did for most of my paying jobs.

As you pursue your paths in life, leave tracks. Just as others have been way pavers for you, so you should aid those who will follow in your way. Do your part to help move society to the place you would like it to be for the health and well-being of generations following your own.

-Baccalaureate address at Brown University, May 26, 2002

1 thought on “Words of Advice from Ruth Bader Ginsburg”