Wolfie the spirited lurcher brings his own brand of unbridled love home to a woman in a complex relationship. 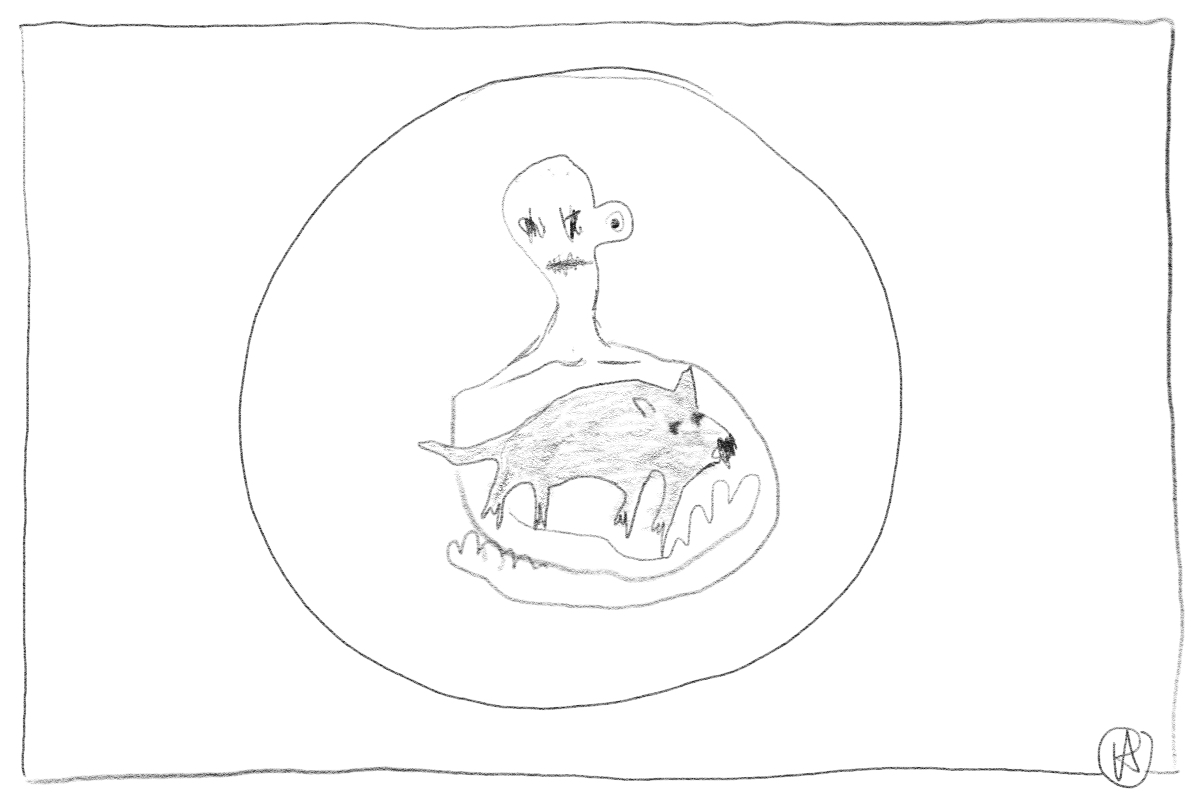 ‘THIS ONE’S A marriage breaker.’ Stacey, my stepdaughter, cast her eye across the paddock where my horses grazed in stippled morning light. Her hands were shoved in her coat pockets.

‘Come inside. I’ll make coffee while you tell me his story.’

‘He’s the worst dog in the pound.’ Stacey held the steaming mug to her chest.

‘You don’t paint a pretty picture.’

Why was I even talking about a dog? I already had a goat, ducks and three rescue horses.

Stacey worked for the RSPCA, she loved animals as much as I did yet our relationship was prickly, complex. There was a mutual respect, a fragile rapport. When she’d arrived, I was mowing the grass which harboured toxic weeds after days of sheeting rain.

‘A woman wants him to be a guard dog for her factory.

‘I could check him out.’

I bridled. ‘I’m not looking for a dog, but this lurcher faces a grim future.’

There was an awkward lull, but when squealing rosellas landed on the galvanized roof with scratchy feet, Stacey smiled.

If I didn’t talk this through with Tony he would be livid. Yet, this was the first time Stacey had wanted my help. How could I say no?

‘Today?’ Stacey reached for a chocolate biscuit. The hope in her tone, a knife in my gut.

Stacey led me through RSPCA reception, past glass-fronted cages. The mauve pseudo-homey décor only amplified the tenants’ despair. I saw listless cats, a spindly guinea pig, a budgie. There were Bull Arabs, a sleeping Mastiff, I looked away from an elderly Bichon Frise, a lump rising in my throat. Did its owner die?

‘The lurcher’s out the back.’

I heard Wolfie before I saw him, his caterwauling in a resonant concrete chamber pained my ears. No wonder he was marooned in a dreary annexe separated from the RSPCA’s more appealing charges. When Wolfie saw Stacey, he jumped up like a crocodile leaping out of the water for a chunk of meat. She lunged for Wolfie’s collar over the pen’s gate and, as the dog squirmed and twisted, attached a lead.

‘He’s super strong. Step back when I lift the catch, he’ll thrash about.

Stacey braced. Wolfie pulled. His nails scrabbling for purchase on the concrete floor. I followed as he dragged her to an outside pen. When she released him, relief flooded her face. Back and forth, he padded along the steel mesh fence, a maddened captive in a zoo.

‘Gillian, I’d wait a moment before going in.’

Once inside, I wasn’t worthy of a sniff.

Next visit, Wolfie was already yarded. When I slipped inside the gate, he ignored me. I began to read and ignored him back. Minutes later, he approached, stayed close. Encouraged, treat in hand, I directed him to ‘sit.’ When he obliged, I was thrilled. But he leapt up and I slumped against the fence and dropped the biscuit which he devoured. I felt dumb; dog duped.

Back again, in drizzly weather, Wolfie’s head was on my lap when Stacey greeted me.

‘Looks like he’s onside now.’ Her positive words encouraged me except her attention was diverted by her phone.

‘My supervisor says the other woman wants to adopt him today.’

‘I’ll take him for a walk.  Let’s chat about it afterwards.’

‘Take care, the ground is wet and slippery.’

Walking Wolfie defeated me. He pulled on the lead, forced me to walk too fast. He lunged at other dogs, changed direction on a whim. I was afraid the steel chain leash would wrap tight around my leg. Riding my spookiest horse on a gusty day wasn’t as hazardous but I couldn’t condemn this love-starved, desperado to life as a security detail.

He wasn’t a looker, but I was smitten by his whiskered face, his wiry black coat like a bristling brush. There was no way out.

‘He’ll be fine.’ Tony barely tolerated the animals I had.

For us to assess your suitability.

I was rankled. How well I cared for animals defined me.

‘Are your fences in order?’ Stacey asked pen poised.

‘You know they are.’

‘Yes, the fences contain horses, but lurchers squeeze through gaps.’

‘Are you in full time work?’

Relevant, if I wanted to buy a house, a flash car, or fly across international time zones and increase my carbon footprint, but not for taking on a rogue dog.

Stacey’s formality irritated. Outside, a delighted young woman cooed at a Jack Russell in her arms. Her cheerful partner pushed a trolley loaded with feed, a dog bowl, bedding, a blue collar and a squeaky turtle toy. An easier, more live-able prospect.

‘Gillian, how old are you?’

‘That’s an enquiry never asked in my best interests.’

Stacey abhorred the age difference between myself and her Dad. I was three years older.

‘Right, that’s all.’ She stamped the form.

‘After Wolfie’s lived with you for several weeks, an RSPCA officer will check your premises for suitability. If all goes well, the adoption can go ahead.’

‘Stacey, I’m offended by your lack of trust.’

I was stung. Stacey avoided eye contact. ‘I’ll get Wolfie.’

My decision had raised a few eyebrows if the bemused teenage volunteers were anything to go by. I fretted how I’d get him to the car. Yet, when I took Wolfie’s lead, he walked in step, with all the poise and pointy-eared comportment of a Crufts prize-winner.

When I pulled up at our gate, Tony opened it in good spirits. But his optimism darkened at the sight of a panting dog in our green Jazz.

‘Gillian. What have you done?’

When Wolfie leapt on and off the raised flowerbeds Tony stared in horror. Next, the dog zoomed in manic circles and dislodged clumps of grass until he flung his body on the driveway’s stony ground.

‘Will he chase the horses?’ Tony pressed the divots back into the lawn with his boot.

Tony removed his gardening gloves. ‘Gillian, there is no we.

When I went to bed, Wolfie slept on the floor. If I moved, he’d stand with his front paws on the bed. Tony couldn’t sleep and Wolfie’s separation anxiety didn’t help. I grabbed a blanket and slept on the sofa in the TV room.

Stacey had warned me Wolfie was a ‘marriage breaker’ and her words haunted me, Tony was unreachable. I’d apologized, but the night in the TV room stretched into weeks.

Going anywhere without Wolfie was a disaster. One day, he wiggled through loose wooden slats underneath our Queenslander, knocked over a huge can of yellow paint, stood in the spill and daubed mustard-toned paw prints all over the patio, the stairs, the grey kitchen tiles. Another time, he went into my office—he could turn the doorknob with his teeth—jumped onto my desk, scattered the papers, and knocked my laptop to the ground. I berated myself. What had I taken on? My sighthound was taking my anxiety to a whole new level.

I was a prisoner under house arrest.

Judith, an old friend, came to stay. Despite Wolfie’s insecurities, she insisted we go out to see a film.

I cupped Wolfie’s head in my hands, gazed into his pooling eyes.

Wolfie scratched at the front door and when I opened the gate for Judith to drive out, I was gutted by his operatic yowl.

The film was fun, but afterwards we rushed home. I suspected Wolfie hadn’t taken

our departure lightly. I flung the front door open, and turned on the light and yelled.

In the middle of the living room was a cairn, a mountain of stuff; jackets, towels, dresses, a dog blanket, shoes and boots. From the larder, he’d taken packets of dried lentils, beans and chickpeas, ripped them open and created a moat of pulses. Shredded paperbacks littered the floor.

I admired his ingenuity, he’d nicked bananas from the fruit bowl, dragged empty cardboard boxes in the basement up the stairs. He had laboured hard.

‘When does Tony get home?’ Judith folded towels.

‘Whoa!’ She screeched. We flew into recovery mode; clothes flung in the washing machine, the floor vacuumed. I wanted to shout at him, but when I found him contrite under a table my resolve evaporated. Disheveled, I jumped into the shower. Tony didn’t need to know about Wolfie’s architectural leanings. When I heard his key turn in the lock, I grabbed a glass of white wine to conjure an air of carefree indulgence.

I took Wolfie on long walks to exhaust him except they didn’t. My so-last-century ‘sit’ and ‘stay’ rituals were getting nowhere. I put a notice up in the post office. Wanted. Experienced Dog Trainer. The next day, my phone trilled early.

Pedro pushed past me when I opened the door. Tony had already left for work. He no longer said goodbye.

‘How can I help?’ Pedro hung his coat in the hallway.

Pedro clipped a lead to the lurcher’s collar and walked him along the lawn parallel to the yard where my dreamy-eyed horses consumed a hay breakfast. Wolfie was subdued. Pedro had some kind of superpower.

‘What else do you need help with?’

Wolfie pulled away from Pedro, who corrected him with a swift, sharp jerk on the lead. When Wolfie obeyed, Pedro flashed him a smile.

‘Gain his respect Gillian. Or, return him.’

‘Contain him when you go out. He’s terrified he’ll lose you.’

‘Bayside Day Care’ was on my way to work. When Doug, the lip-studded, manager saw the lurcher, he eyed him with glee.

‘Great to have a real dog because we’re up to our eyeballs in fluffy shihtzus.’

When I went back to fetch Wolfie, Doug had already gone home, with a migraine.

‘How was he?’ I asked the blond assistant.

‘A nightmare.’ She filed her nails vigorously.
‘Can I bring him again?’

She blew dust off her nails.

One day, I had commitments in town. Tony promised to feed Wolfie no later than five, I didn’t want to give the creature an excuse to wander. At six-thirty, I rang Tony, but Trudy, a neighbour, answered.

Tony pointed at a bulky shape near a tangled mess of sickly-scented jasmine. It was dark, I couldn’t see, which scarcely mattered because the weakness in my legs said it all. Trudy shone a torch and I reeled from the sight of Wolfie’s body.

‘Tony was with me,’ Trudy blurted. ‘We lost track of time. Wolfie ran into the road and was killed outright by a speeding car.’

Numb, frozen, and immune to secrets, especially theirs, I sensed Trudy’s arm was threaded through Tony’s.

I reached for Wolfie through a buzzing curtain of mosquitoes. His muscular body was warm, limbs, fluid. Crazed by grief, I gripped him tighter, directed all my will at him and for a moment, I truly believed the intensity of my love would make him breathe again. 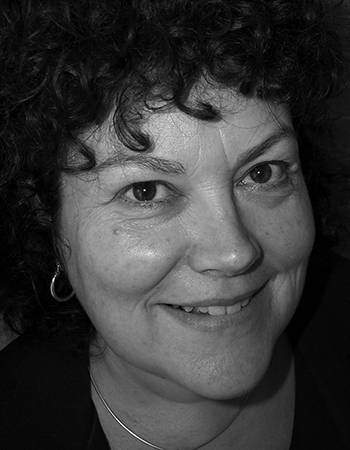 Gillian Wills has short stories published with Unbelievable Stories, Underground Writers, Dillydoun Review and The Challenge, and has been longlisted for a Factory Fiction award. As a journalist she has published with The Australian, Limelight Magazine, Australian Book Review, The Courier Mail, Griffith Review and Artist Profile. She has just finished the manuscript for a novel set in the music world.