The default state of all intelligent human beings is confusion. And what if ‘living your truth’ is just flinging yourself into another delusion? 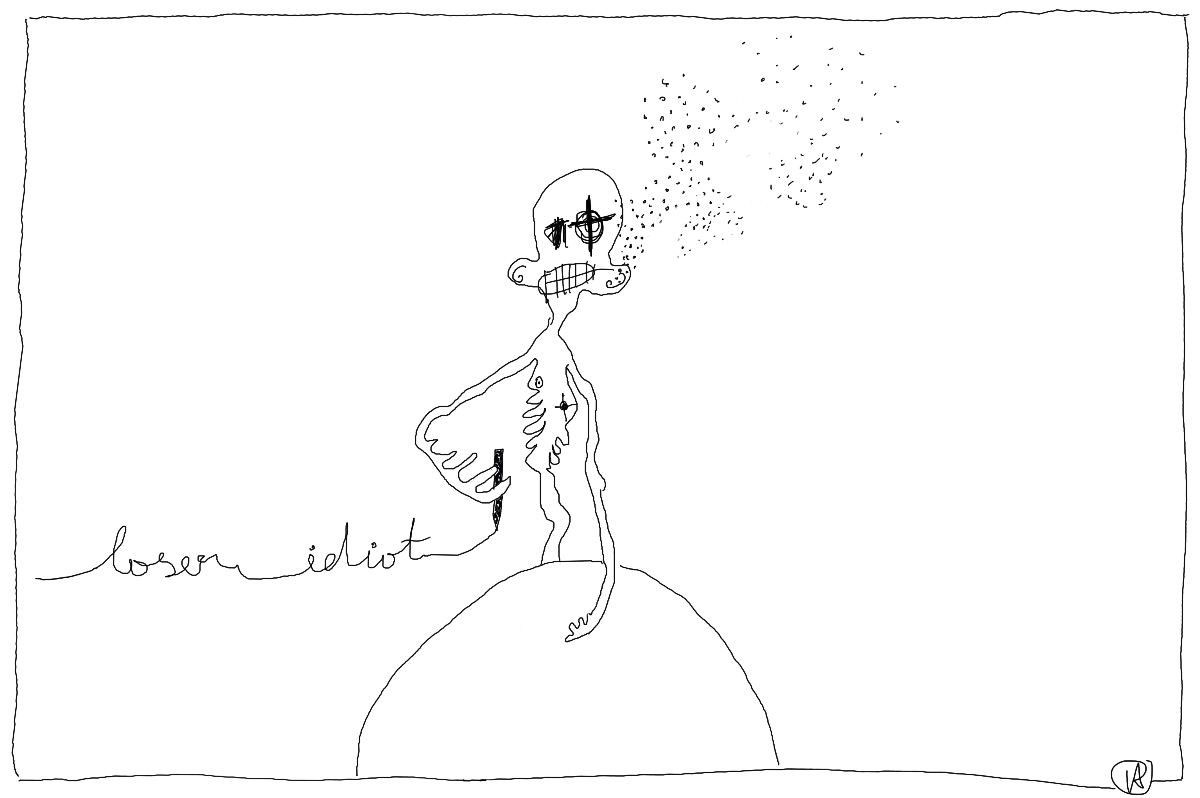 “WHAT IF IT ISN’T a curse?” she asks and adjusts herself in the big chair.
I steel myself for more gaslighting.
“I don’t know what you call it then. It’s infected every good moment. Any chance of happiness…”
She starts writing again. What is she writing? L-O-S-E-R. I-D-I-O-T.
“Fundamentally it’s the reason I do everything alone. It’s the reason I stare at the ceiling and wonder if the beam will hold a rope. What is that if not a curse?”
The writing accelerates to a crescendo. She puts down the pen and looks at me.
“You love your work at the gym.”
Yes.
“You’re the boxing coach who cares.”
True.
“And your friends from the poetry conference – this part of you draws you to them and them to you as well.”
Yes, but… (I notice I spend most of my time trying to convince her that I’m hopeless.)
She tilts her head and smiles, almost coquettish.
“And your poems?”
“To hell with my poems. They’re worthless. It’s just something I do to pass the time when I’m not masturbating. In fact, it’s not that different.”
She’s writing again.
“I’d give it up. All of it. I’d throw it all away to be different than I am. Just to…” The writing stops. “Well…you know. We’ve been over this a million times…”

That’s all the time we have for today.

You know it’s been good therapy when it seems like the world is brand new and your head is buzzing with thoughts and questions. That almost never happens with Dr. Rachel. I’m not sure if it’s me or her. But today I’ve got that feeling. Rather than hate and reject and try to murder half of who I am, could I accept even celebrate it, be grateful? It was always there anyway. That soft one, the beauty-lover. The more I tried to suppress her the sicker I got. I had tried to calm her with Xanax but she just shrieked louder. I tried to poison her with fentanyl but she wouldn’t die.

Oh who knows anything? Nobody. The default state of all intelligent human beings is confusion. And what if ‘living your truth’ is just flinging yourself into another delusion? I don’t even know if she is ok with me calling her Dr. Rachel. Dr. Gottlieb seems wrong, like maybe if she was an elderly, beard-stroking Reb, dispensing wisdom from Maimonides.

I miss going to an actual office for therapy. Walking to  the building downtown. Basking in the sunshine or dodging the rain, smelling the bakery on the corner, waiting for the light to change, head full of cognitive distortions and unresolved trauma. I have an appointment. And having a place to be at a certain time may be enough reason to go on.

I have no place to be now, with the laptop finally closed on the edge of the bed, I lie back and stare at the ceiling.

My whole life I’ve done this. Lying on a bed—bunk bed, teenage bed, marriage bed, detox bed, bachelor apartment bed—staring at the ceiling and asking, what the fuck, what the fuck?

What the fuck… I stare up at the industrial light fixture with the silver bulb that hangs directly over me like an unblinking eye. What the fuck?

Not like an eye. In the vision I saw that this was an eye, and the white filament running along the ceiling was not a power cord but the optic nerve connecting it to some kind of alien consciousness. It wasn’t frightening at all. I just saw clearly that I was being observed dispassionately, and the aliens, or whatever they were, were making notes like Dr. Rachel. L-O-S-E-R. I-D-I-O-T.

My phone buzzes on the nightstand. No point in looking. It’s either Battery Sufficiently Charged or Account Balance is Low.

I look anyway. It’s a text from Nirvana, one of the girls I matched with on Tinder but never met up with because she seemed a little unstable and her pics (pink hair, blue hair, dead eyed gaze) gave me a Cluster B feel. Hey-wave. Hey.

We meet at J. Christopher’s near the coffee shop and she has what they all have: omelet with hot sauce.

She is tiny, pretty, with short black hair, cruel eyes, and a turquoise bull ring in her nose, like an alternative Betty Boop. I start worrying about her age, but no, she’s 20. I’m regretting this already. She’s got more red flags than Kim Jong Un’s birthday party.

1) She’s a lightworker.
2) She’s an empath.
3) She’s an animal attractor (whatever in the hell that is).
4) She is working through her trauma.
5) She keeps calling me “Bro.” (Bro, this bitch cut me off yesterday. I gave her the finger and she was pressed, bro.)
6) Everyone is toxic. Her mom. Her dad. Her brother. Everyone.

Her gaze fixes on my NA bracelets. “What’s your drug of choice, bro.?”

This girl’s been around. Turns out we both were at Ridgeview at the same time. She’s not an addict though. We addicts were given blue folders to carry our paperwork. The mentally troubled were given yellow folders. This became a kind of code, as in “Stay away from her, she’s a Yellow Folder.” Nirvana was a certified Yellow Folder. (My roommate, The Bird [he preferred to be called that, as he believed himself to be a Bird,] would occasionally plop himself down on my bed, flap his wings, and tell me he’d met “the hottest Yellow Folder.” The Bird was—and I know this is shocking—also a prolific Yellow Folder.)

As we finish, the server girl, who is a bit older than my date, takes our plates and I give her an overly effusive ‘thank you!’ which comes out sounding like an apology for some reason.

‘Thanks for lunch,’ she says. ‘I feel like my spirit needs to attune with nature now.’

That’s it. She’s just some little tease scamming me for a meal. It’s how they do things now. There’s even a name for it—a ‘food-y call.’

‘I’ve got nature at my place,’ I say. If there’s no point, you might as well try?

We talk on the couch. She asks what’s in the cage.
Guinea pigs. But they are hiding now. (So much for being an animal attractor.)
She asks about a massage. Her shoulders are so tight. Let’s go upstairs.

She lies on my bed and I go to work on her. I genuinely love this, not as a means to an end. I love worshipping her body with my hands. I work her back, her neck. Her body is so tiny, my hands seem monstrous and dangerously strong. I love rubbing her calves and the taut vellum of her thighs. I even massage her disgusting de-sandaled feet, kiss each sole, and start again on her back.

She lifts her head. ‘Do you like pussy play?’
I sure do. What is it?
‘You just play with my pussy.’
That makes sense.
‘I haven’t been touched in a year and you’re making me really wet.’
She wiggles out of her skirt, and kneels on the bed. Her pink lace bikini panties are pulled high into a tight V.
I slide my palm over her mons and she shudders and moans like Alex used to when he got a chin scratch. Jesus, what must the aliens be thinking?

She collapses back on the bed and lifts her hips as I pull her panties off triumphantly. Her tiny flower smells like magnolia and tastes like honeysuckle. Lips swollen, knotted rose ripe for the opening.

Fuck the caves of St. Helena.
Fuck the Metropolitian Museum of Art.
Fuck a Nobel prize.
Fuck Mozart.
This is it.

I note the pink Mobius strip of rolled down panties on the edge of the bed like a discarded snakeskin.

‘Bro, can you please fuck me now?’

A minute later, I am trying with every fiber of my blood and body and brain to resist, and yet, like sweet tea on a hot day, soft rest after long travel, it happens – I begin to speak. Not of my own accord. It’s like I’m possessed, my will evaporates and those terrible fateful words flow out of me.

Now there’s something I have to tell you:
When I was a kid, I had this certainty that I was destined to make some great discovery. I would solve some ancient riddle, break nature’s code, discover a tremendous secret that would change the world. (‘Goddamn you’re grandiose,’ said my friend Sweetie Pie when I confessed this to her.) Up to this point it had just been what Horatio calls ‘a mote to trouble the mind’s eye.’ But now I had split the atom. Descried the double helix in an x-ray. I had discovered electricity. No—better than electricity!

You see, this was the riddle of the ages. It’s what sent Ponce De Leon traipsing around La Florida and thousands of crusaders marching year after year toward a church in Jerusalem that didn’t exist. But all those people were dead and I was alive and I had bested Stephen Hawking, who only made discoveries about black holes and (as is well documented) didn’t suffer as much from ALS as from an unquenchable longing for the companionship of beautiful, young, indulgent women.

I can go back. I can fix my mistakes. I can make things right.
I can be young again. I can become who I always wanted to be.
I can go back… I can go back… the future is mine.
I’m not cursed after all.

Another minute later, another lifetime, we lie on our backs, sweating and staring up at the aliens. I want to keep touching her, tracing the outline of her body in the darkness the way you would touch a work of art, to be part of the mysterious beauty. She screws herself up close under my arm. ‘I love you, Nirvana.’

She nuzzles my neck. ‘You’re pretty chill, bro.’ she says.

I’m elated. It’s like I’m high again – but not exactly because of the sex which is not materially different from Sweetie Pie’s visits. I had finally made a scientific discovery that would shake the world and I would publish my findings and change history:

This girl has a time machine in her cooch. 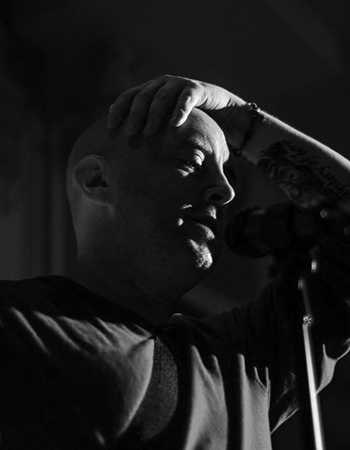 Chris Jansen lives in Athens, Georgia. His previous books include 100 Love Sonnets by Pablo Neruda (translator) and We Can Be Heroes: A Rehab Memoir. He was nominated for Georgia Author of the Year for 2020.