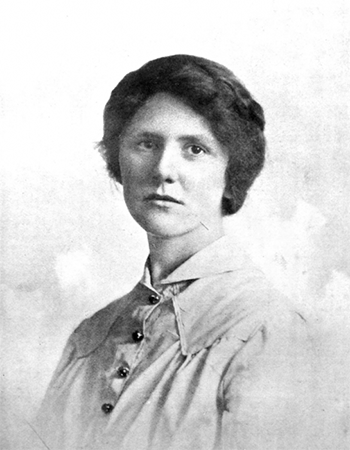 “It is not ecstasy, that leap out of the self that makes man like a god. I am not out of myself, but in myself. I am. To know Being, this is the final grace accorded from the mountain.”

The Living Mountain, Nan Shepherd’s memoir of her journeys hiking in Scotland’s Cairngorm range, is considered a seminal piece of nature writing. Published thirty years after it was written, the book described a very physical intimacy that grew and developed through Shepherd’s exploration of the landscape. In this last chapter from the short book—titled Being—Shepherd wrote about the way in which her senses enlarged her experience of her own body and relationship to the mountains, and how the expansiveness of knowing became apparent to her. She invoked images of yogis and pilgrimage as a way of explaining the physical discipline of the journey that itself is part of the technique by which god is sought.

Here then may be lived a life of the senses so pure, so untouched by any mode of apprehension but their own, that the body may be said to think. Each sense heightened to its most exquisite awareness, is in itself total experience. This is the innocence we have lost, living in one sense at a time to live all the way through.

So there I lie on the plateau, under me the central core of fire from which was thrust this grumbling grinding mass of plutonic rock, over me blue air, and between the fire of the rock and the fire of the sun, scree, soil and water, moss, grass, flower and tree, insect, bird and beast, wind, rain and snow—the total mountain. Slowly I have found my way in. If I had other senses, there are other things I should know. It is nonsense to suppose, when I have perceived the exquisite division of running water, or a flower, that my separate senses can make, that there would be nothing more to perceive were we but endowed with other modes of perception. How could we imagine flavour, or perfume, without the senses of taste and smell? They are completely unimaginable. There must be many exciting properties of matter that we cannot know because we have no way to know them. Yet, with what we have, what wealth! I add to it each time I go to the mountain—the eye sees what it didn’t see before, or sees in a new way what it had already seen. So the ear, the other senses. It is an experience that grows; undistinguished days add their part, and now and then, unpredictable and unforgettable, come the hours when heaven and earth fall away and one sees a new creation. The many details—a stroke here, a stroke there—come for a moment into perfect focus, and one can read at last the word that has been from the beginning.

Knowing another is endless. The thing to be known grows with the knowing.

These moments come unpredictably, yet governed, it would seem, by a law whose working is dimly understood. They come to me most often, as I have indicated, waking out of outdoor sleep, gazing tranced at the running of water and listening to its song, and most of all after hours of steady walking, with the long rhythm of motion sustained until motion is felt, not merely known by the brain, as the ‘still centre of being.’ In some such way I suppose the controlled breathing of the Yogi must operate. Walking thus, hour after hour, the senses keyed, one walks the flesh transparent. But no metaphor, transparent, or light as air, is adequate. The body is not made negligible, but paramount. Flesh is not annihilated but fulfilled. One is not bodiless, but essential body.

It is therefore when the body is keyed to its highest potential and controlled to a profound harmony deepening into something that resembles trance, that I discover most nearly what it is to be. I have walked out of the body and into the mountain. I am a manifestation of its total life, as is the starry saxifrage or the white-winged ptarmigan.

So I have found what I set out to find. I set out on my journey in pure love. It began in childhood, when the stormy violet of a gully on the back of Sgoran Dubh, at which I used to gaze from a shoulder of the Monadhliaths, haunted my dreams. That gully, with its floating, its almost tangible ultramarine, thirled me for life to the mountain. Climbing Cairngorms was then for me a legendary task, which heroes, not men, accomplished. Certainly not children. It was still legendary on the October day, blue, cold and brilliant after heavy snow, when I climbed Creag Dhubh above Loch an Eilein, alone and expectant. I climbed like a child stealing apples, with a fearful look behind. The Cairngorms were forbidden country—this was the nearest I had come to them; I was delectably excited. But how near to them I was coming I could not guess, as I toiled up the last slope and came out above Glen Einich. Then I gulped the frosty air—I could not contain myself, I jumped up and down, I laughed and shouted. There was the whole plateau, glittering white, within reach of my fingers, an immaculate vision, sun-struck, lifting against a sky of dazzling blue. I drank and drank. I have not yet done drinking that draught. From that hour I belonged to the Cairngorms, though—for several reasons—it was a number of years until I climbed them.

I believe that I now understand in some small measure why the Buddhist goes on pilgrimage to a mountain. The journey is itself part of the technique by which the god is sought. It is a journey into Being; for as I penetrate more deeply into the mountain’s life, I penetrate also into my own.

I believe that I now understand in some small measure why the Buddhist goes on pilgrimage to a mountain. The journey is itself part of the technique by which the god is sought. It is a journey into Being; for as I penetrate more deeply into the mountain’s life, I penetrate also into my own. For an hour I am beyond desire. It is not ecstasy, that leap out of the self that makes man like a god. I am not out of myself, but in myself. I am. To know Being, this is the final grace accorded from the mountain.

2 thoughts on “Out Of the Body and Into the Mountain: Nan Shepherd’s Journeys Among the Scottish Cairngorms”