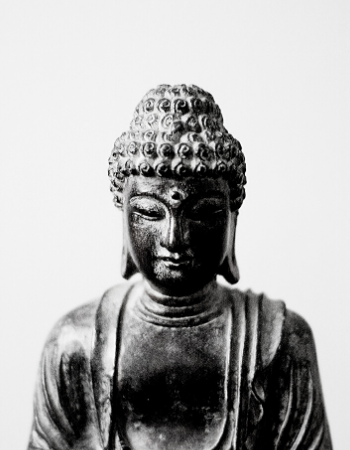 To the wise person, there are no longer any views concerning what is seen, heard, or sensed. How could one judge or have an opinion concerning such a pure being who has let go of all views? – The Paramatthaka Sutta

Gustav Flaubert said, ‘There is no truth, there is only perception.’ Clinging to views, according to Buddhist teaching, is an empty and futile way of interfacing with the world. The Paramatthaka Sutta, a text from the larger Sutta Nipata, is written as an octet about truth and wisdom that characterizes adherence to points of view and dogmatic thinking as ‘bondage, as the absence of freedom.’ The story of the sutta is that it was presented by the Buddha in response to the story of the blind men and the elephant, as a means of warning against the spiritual inefficacy of dogma and ideology.

He who still abides by a dogmatic view, considering it as the highest in the world, thinking “this is the most excellent” and disparaging other views as inferior, is still considered not to be free from disputes.

When seeing, hearing, or sensing something and considering it as the only thing that can bring comfort and advantage to self, one is always inclined to get caught in it and rule out everything else as inferior.

Caught in one’s view and considering all other views as inferior—this attitude is considered by the wise as bondage, as the absence of freedom. A good practitioner is never too quick to believe what is seen, heard, and sensed, including rules and rites.

A good practitioner has no need to set up a new theory for the world, using the knowledge he has picked up or the rules and rites he is practicing. He does not consider himself as “superior”, “inferior”, or “equal” to anyone.

A good practitioner abandons the notion of self and the tendency to cling to views. He is free and does not depend on anything, even on knowledge. He does not take sides in controversies and does not hold on to any view or dogma.

He does not seek for anything or cling to anything, either this extreme or the other extreme, either in this world or in the other world. He has abandoned all views and no longer has the need to seek for comfort or refuge in any theory or ideology.

To the wise person, there are no longer any views concerning what is seen, heard, or sensed. How could one judge or have an opinion concerning such a pure being who has let go of all views?

A wise person no longer feels the need to set up dogmas or choosing an ideology. All dogmas and ideologies have been abandoned by such a person. A real noble one is never caught in rules or rites. He or she is advancing steadfastly to the shore of liberation and will never return to the realm of bondage.

From the Paramatthaka Sutta
Translated by Thich Nhat Hanh
Featured in: Chanting from the Heart