DECEMBER IS HERE, and soon snow will fall and accumulate in amounts that must be measured in feet. There will be days when hard bits of frozen rain will be shot from the blackened clouds and will batter the frozen faces of intrepid Mainers in a windy torrent of snow, ice, and rain. To hikers, snowshoers, and fearless winter campers, February with its hail that stings our rosy cheeks like chilled birdshot, is not a month to binge prestige TV or do puzzles next to a window with forlorn eyes pining for the green and the bloom of Springtime. My seasonal doldrums are more acute and frustrating when I am searching the shoulder of Acadia’s serpentine roads for a place to park while watching barely visible human specks circumvent the Beehive Trail like ants on a watermelon.

In the summer months, the Maine coast is bombarded by millions of tourists looking to bag a peek with a view and satiate their appetites with Maine’s iconic crustacean. They can have it. In November, the north woods are the venue for modern bloodsport where the ancient rite of killing your own food is capped by nights at camp accompanied by light beer, playing cards, and flavored chewing tobacco. I believe strongly that the typical hunter is an ideal steward of the land. I know they have affection and pride for wild places— it is built into the ethic of the culture. But I prefer the quiet ambience of the north woods in the season following that of blaze orange and Mossy Oak. When the freezers are stocked and the anxious ungulates have receded to the depths of the wild, and most evidence of man or beast has been blanketed in December snowfall, is when I take to the trails. And while I love sweater-weather, puffy vests, and the cornucopia of autumn foliage splashed across the hinterlands, I prefer the cold, the whiteness, and the solitude of the winter forests.

If you—like me—are not a skilled naturalist and don’t have an encyclopedic knowledge of the flora, fauna, fungi, or the rivers, lakes, and various coastal wildernesses, then the stimuli of the forest can be overwhelming—especially in the fertile summer months when the aliveness of the woods is palpably wild. At times, the hiking trails around my favorite woods can feel like a classroom, a laboratory where I am over my head and behind on my homework. In the snow-covered minimalism of a winter hike, my opportunity for zen is more accessible. I am often alone, but for the creatures who stir invisibly behind curtains of evergreen and snow drifts. Their stories I glean mostly from the tracks left in soft snow; the rambunctious happenings of nocturnal life are sprawled across the trails in elegant etchings and tell of tabloid-worthy drama, and matters of life and death. I follow the impressions of raccoon feet to trailside oak trees, chaotic rabbit tracks into the brambles, and the faintest wingstroke of an owl upon powdered snow, and I know the night before was alive with the theatre of the wilderness.

On days when the weather has been brutal and rendered the forest terrain impossible to move across, I like to find a little-used backroad and walk through the corridor of stiffened earth along the walls of snow that insulate the space of sound and wind. A pair of old boots, ice cleats, a balaclava, plenty of water, and a plan that includes telling a friend where you will be and when you plan to return, is all you need. I know I don’t need to tell a Mainer how to stay warm or find joy in nearly-suffering—so I won’t. I wish only to remind them of the opportunity for adventure and communion with the wild even in the dark and bitter months of January, February, and March.

This story was previously published in the Bangor Daily News 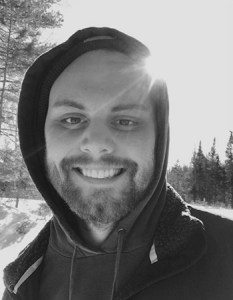 Anthony Emerson lives and writes at the edge of the North Maine Woods. His essays, fiction, and poetry have been published in Appalachia Journal, The Dillydoun Review, Northern New England Review, Tiny Seed Journal, Flora Fiction and Visitant. Outside of writing he enjoys hiking and kayaking with his grandmother.