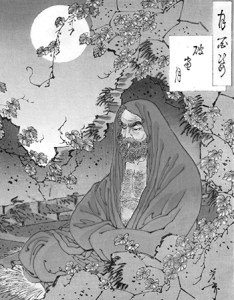 “If you don’t see your nature, and run around all day looking somewhere else, you’ll never find a Buddha. The truth is, there’s nothing to find..”

Bodhidharma is the 5th century monk credited with introducing into China from India the importance of dhyana – contemplation and meditation – as the core Buddhist practice. His teachings took root in China and dhyana became Ch’an, which became Zen. The peripatetic Bodhidharma had few disciples in his lifetime, and the few texts now attributed to him are of questionable historicity. However, they still serve as a rich source for early Zen teaching that encapsulates the fundamental point attributed to Bodhidharma: that the practice of self-awerness as embodied by zazen meditation is not a method of attaining enlightenment but the practice of enlightenment itself. This teaching is condensed in a text called The Bloodstream Sermon, and this excerpt stresses the essence of the imminence of the truth of one’s own nature: ‘You might think you can find a Buddha or enlightenment somewhere beyond the mind, but such a place doesn’t exist.‘

Everything that appears in the three realms leads back to the mind. Hence, Buddhas of the past and future teach mind-to-mind without bothering about definitions.

But if they don’t define it, what do they mean by mind?

Through endless kalpas without beginning, whatever you do, wherever you are, that’s your real mind, that’s your real Buddha. This mind is the Buddha says the same thing. Beyond this mind you’ll never find another Buddha. To search for enlightenment or nirvana beyond this mind is impossible. The reality of your own self-nature, the absence of cause and effect, is what’s meant by mind. Your mind is nirvana. You might think you can find a Buddha or enlightenment somewhere beyond the mind, but such a place doesn’t exist.

Trying to find a Buddha or enlightenment is like trying to grab space. Space has a name but no form. It’s not something you can pick up or put down. And you certainly can’t grab it. Beyond this mind, you’ll never see a Buddha. The Buddha is a product of your mind. Why look for a Buddha beyond this mind?

Buddhas of the past and future only talk about this mind. The mind is the Buddha. And the Buddha is the mind. Beyond the mind there’s no Buddha. And beyond the Buddha there’s no mind. If you think there’s a Buddha beyond the mind, where is he? There’s no Buddha beyond the mind, so why envision one? You can’t know your real mind as long as you deceive yourself. As long as you’re enthralled by a lifeless form, you’re not free. If you don’t believe me, deceiving yourself doesn’t help. It’s not the Buddha’s fault. People, though, are deluded. They’re unaware that their own mind is the Buddha. Otherwise, they wouldn’t look for a Buddha outside the mind.

If you don’t understand by yourself, you’ll have to find a teacher to get to the bottom of life and death. But unless he sees his nature, such a person isn’t a teacher. Even if he can recite the twelvefold canon, he can’t escape the wheel of birth and death. He suffers in the three realms without hope of release.

Long ago, the monk Good Star was able to recite the entire canon. But he didn’t escape the wheel because he didn’t see his nature. If this was the case with Good Star, then people nowadays who recite a few sutras or shastras and think it’s the Dharma are fools. Unless you see your mind, reciting so much prose is useless.

To find a Buddha, all you have to do is see your nature. Your nature is the Buddha. And the Buddha is the person who’s free, free of plans, free of cares. If you don’t see your nature, and run around all day looking somewhere else, you’ll never find a Buddha. The truth is, there’s nothing to find. But to reach such an understanding you need a teacher. And you need to struggle to make yourself understand. Life and death are important. Don’t suffer them in vain. There’s no advantage in deceiving yourself. Even if you have mountains of jewels and as many servants as there are grains of sand along the Ganges, you see them when your eyes are open. But what about when your eyes are shut? You should realize then that everything you see is like a dream or illusion.

Bodhidharma (5th/6th century)
From: The Zen Teaching of Bodhidharma