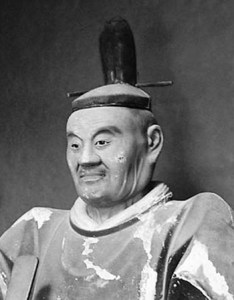 ‘The mindfulness to observe the dynamic of situations even in a group is an art of war,’ wrote 17th century samurai Yagyu Munenori in an introduction to his work, The Book of Family Traditions on the Art of War. Munenori was also a student of Zen Buddhism and encouraged his readers to observe the principles of Zen teachings when developing their martial arts skills. He completed this book in 1632, the same year he was made head of the Secret Service for the Tokugawa tent government. The book is divided into three sections: The Killing Sword, The Life-Giving Sword and No Sword, Zen terms meant to be adapted to both war and peace time composure that reflect the teachings of the elimination of violence, the giving of life and the capacity to make full use of the resources of the environment. In this excerpt, he takes up the popular image of the moon reflected in the water to explain its application in martial arts training.

The Mind is Like the Moon in the Water, the Body is Like an Image in a Mirror

The sense in which these expressions are applied to martial arts is as follows:

The reflecting of the moon in the water is an instantaneous phenomenon. Even though it is way out in space, the moon casts its reflection in water the very instant the clouds disappear. The reflection does not descend gradually from the sky; it is cast at once, before you can even blink an eye. This is a simile for the way things reflect in people’s minds as immediately as the moon reflects in a body of water.

This is the way the human mind reflects in things. The mind may travel even as far as China in the blink of an eye. Just as you think you are dozing off, your dreams travel to your native village far away. The Buddha explained this kind of reflection of the mind as being like the moon in water or images in a mirror.

These expressions also apply similarly to the moon in the water in martial arts. You should transfer your mind to the appropriate locus like the moon reflecting in a body of water. Where the mind goes, the body goes; so as soon as a face-off begins, you should shift your body to the appropriate spot like an image reflecting in a mirror. If you do not send your mind there beforehand in preparation, your body will not go.

In reference to the locus, it is “the moon in the water.” In terms of the person, it is “the quiescent sword.” In either case, the sense of shifting the body, feet, and hands is the same.

Yagyu Munenori (1571-1646)
Translation by Thomas Cleary
From: The Book of Family Traditions on the Art of War