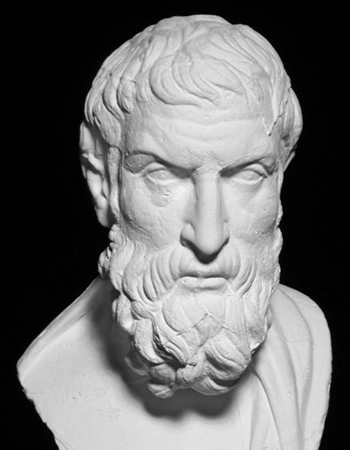 “It is not things themselves that trouble people, but their opinions about things.”

The Ancient Greek philosopher Epictetus was a thinker of the Stoic movement who put forward a system of ethics grounded in a pragmatic and secular observation of the world and nature. Born into slavery, Epictetus spent a lot of time expounding his idea of freedom: that mental liberation was a paramount human pursuit, and that that type of freedom was all encompassing and beyond the practical concerns or situations of a person’s life. His path to freedom involved attending to the aspects of life that can be controlled—our responses and motivations—while meeting with equanimity the things we can do nothing about.

It is not things themselves that trouble people, but their opinions about things. Death, for instance, is nothing terrible (otherwise, it would have appeared that way to Socrates as well), but the terrible thing is the opinion that death is terrible. So whenever we are frustrated, or troubled, or pained, let us never hold anyone responsible except ourselves, meaning our own opinions. Uneducated people blame others when they are doing badly. Those whose education is underway blame themselves. But a fully educated person blames no one, neither himself nor anyone else.

When you are on a voyage and the boat is at anchor, if you disembark to get water, you may pick up a little shellfish and vegetable on the way, but you need to keep your mind fixed on the boat and keep turning around in case the captain calls; and if he does call, you must drop all those things, to avoid being tied up and stowed on board like the sheep. That’s how it is in life too. If you are given a little wife and child, instead of a little vegetable and shellfish, that will not be a problem. But if the captain calls you, run to the boat and leave all those things without even turning around. And if you are old, never go far from the boat in case you are missing when he calls.

Uneducated people blame others when they are doing badly. Those whose education is underway blame themselves. But a fully educated person blames no one, neither himself nor anyone else.

Don’t ask for things to happen as you would like them to, but wish them to happen as they actually do, and you will be all right.

In all circumstances keep in mind to turn in to yourself and ask what resources you have for dealing with these things. If you see a good-looking man or woman, you will find self-control the appropriate power; if pain afflicts you, you will find endurance; if rudeness, you will find patience. By developing these habits, you will not be carried away by your first impressions.

Never say about anything, “I have lost it”; but say, “I have returned it.” Has your little child died? “It has been returned.” Has your wife died? “She has been returned.” “I have been robbed of my land.” No, that has been returned as well. “But it was a bad person who stole it.” Why are you bothered about the individual the donor used to demand its return? As long as these things are given to you, take care of them as things that are not your own, just as travelers treat their lodging.

Keep in mind that you are an actor in a play that is just the way the producer wants it to be. Your job is to put on a splendid performance of the role you have been given, but selecting the role is the job of someone else.

If you want to make progress, dismiss this kind of reasoning: “If I neglect my business, I will have nothing to live on,” or “If I don’t punish my slave, he will be no good.” It is better to starve to death in a calm and confident state of mind than to live anxiously amidst abundance. And it is better +also+ for your slave to be bad than for you to be unhappy. So make a start with the little things, like some oil being spilled or some wine being stolen. Then tell yourself: “This is the price one pays for not getting worked up, the price for tranquility. Nothing comes free of charge.” When you summon your slave, reflect that he is quite capable of not responding, or if he does respond that he may do none of the things you want. In any case he is too unimportant for your own tranquility to depend on him.

If you want to make progress, don’t mind appearing foolish and silly where outward things are concerned, and don’t wish to appear an expert. Even if some people think you are somebody, distrust yourself. It is not easy, you can be sure, to keep your own will in harmony with nature and simultaneously secure outward things. If you care about the one, you are completely bound to neglect the other.

Keep in mind that you are an actor in a play that is just the way the producer wants it to be. It is short, if that is his wish, or long, if he wants it long. If he wants you to act the part of a beggar, see that you play it skillfully; and similarly if the part is to be a cripple, or an official, or a private person. Your job is to put on a splendid performance of the role you have been given, but selecting the role is the job of someone else.

Epictetus (55-135AD)
From: How to Be Free: An Ancient Guide to the Stoic Life